Tempe, AZ -- (SBWIRE) -- 07/18/2012 -- Anime lovers the world over are flocking to the new website AnimeOnHand.com to see episodes of their favorite anime series. The website allows viewers to watch episodes of more than 178 different anime series with thousands of available episodes on their iPhone, iPod, iPad, Android, Mobile and Tablet Online for free.

As the internet has come to dominate in terms of exposing people in the U.S. to entertainment from around the world, anime and manga have steadily gained popularity among adults and young adults. Many of the most popular anime series in Japan that were previously unavailable here in the U.S. are now available for viewing online via the new website AnimeOnhand. The website recently added more than 2,000 new episodes that are available for free viewing on iPhone, iPod, iPad, Android, Mobile and Tablet online.

“When we started the website several months ago, we were certain that there was a demand for the many anime series installments by adults and young adults in the U.S.,” said an AnimeOnHand spokesperson. “We soon found that iPhoneAnime was far more popular than we first speculated, which led to our making more than 2,000 additional episodes available from differing series.”

American audiences seem to be naturally drawn to anime’s intense story lines and manga-style animation. The mobile anime revolution in the U.S. is spurred by many of the familiar anime series such as “Bleach,” “Naruto” and “Detective Conan,” yet, lovers of the genre are also viewing many anime series that are virtually new to American audience such as “Fairy Tail,” “Gintama” and many others. AnimeOnHand.com has quickly become one of the leading sources of free anime with hundreds of episodes of the highly popular anime series “Bleach” (more than 370), “One Piece” (564 episodes), “Detective Conan” (684 episodes) and hundreds more.

The website features more than 178 different anime series with thousands of episodes available. While iPhone Anime is among the most popular device choices used by AnimeOnHand.com visitors, the website also can accommodate users of iPod, iPad, Android, Mobile and Tablets. “By using HTML5 technology for our videos, we are able to make them available anywhere for free,” said the website spokesperson. “The recent addition of some 2,000 episodes to our roster is only the beginning as we are constantly adding new episodes for fans.” For more information, please visit http://m.animeonhand.com

About AnimeOnHand.com
AnimeOnHand.com is a free service that allows anyone to access thousands of anime episodes on any device. By using HTML5 technology for their videos, the website is able to make them available for viewing anywhere on most mobile devices without cost to the consumer. The website recently added more than 2,000 episodes to its list of 178 shows and offers the most popular anime series with frequent updates a cornerstone of the site. 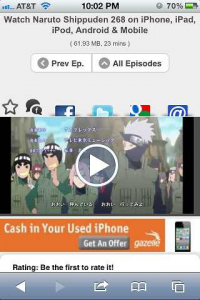