New WMV Player Software from MediaFreeware.com Is a No Cost Option for Consumers

New York, NY -- (SBWIRE) -- 09/12/2013 -- WMV is a proprietary file format created by Microsoft, chiefly used for video files. It is one of the most commonly used file formats for video, mostly because it is supported and promoted by Microsoft’s massive influence. It is often used to upload video files on to the Internet.

One media file related website that has been generating a lot of column inches lately is MediaFreeware.com: a software company that is widely known across the world for creating some of the best free media player software available. The release of their free WMV video file player for the Microsoft Windows operating system has seen their popularity sore once again.

The software uses advanced technology usually only seen in expensive media players to ensure maximum playback quality. Despite this advanced functionality, it is extremely easy for even novice computer users to navigate the interface.

Best of all, the software has an extremely low memory footprint and uses up a tiny amount of computational resources. This makes it an incredibly useful alternative to Windows Media Player, Microsoft’s own player for WMV files.

The WMV player is extremely easy to install, and is completely free to download with no time limits or registration reminders.

A spokesperson for the website said: “WMV files can be easily played by Microsoft’s own Windows Media Player. In fact it is one of the few file formats that Windows Media Player offers core support for. The problem that most users have with WMV files isn’t being able to play them; it’s being able to play them without using the bulky Windows Media Player software. Windows Media Player takes up a huge amount of computational resources, which can seriously slow down older computers. Even some users of new, fast computers have complained of problems, especially when trying to watch a WMV file at the same time as doing something else. We’ve created a free WMV player that takes up an extremely low amount of memory and processor power, letting users play WMV files without their computer running like molasses.”

About MediaFreeware.com
MediaFreeware.com is a software design house that delivers free to download and useful applications across multiple niches. Their trademark is simple to use but highly functional software. 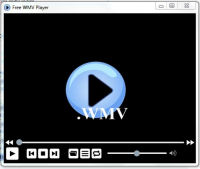