Written by K.N. Ross, ‘Daughters of the Lost World’ uses a gripping narrative of action to help strengthen the bonds of sisterhood among young female readers. With bold in life lessons, the novel imparts its inspiration via a battle-filled adventure that will keep a bedroom light on well into the night.

Chicago, IL -- (SBWIRE) -- 01/16/2014 -- While young adult fantasy has become a staple of the literary landscape, few books are dedicated to inspiring young women and aiding their self-improvement. However, a new novel by K.N. Ross satisfies all thirsts by melding a high-action fantastical adventure with powerful lessons that all young women can keep close for a lifetime.

‘Daughters of the Lost World’ is the first book in a new series by the same title. “It’s all about giving girls a gripping adventure that also contains an abundance of inspiration for them to stay close to those they love. If the book’s four heroines fail to foster strong bonds of sisterhood – their lives could literally be on line!” says Ross.

When a horrible phenomenon settles into humanity four girls are forced to accept their destiny and take their place in the battle between good and evil.

With the help of their ancient teacher and guide, Taryn, Vanessa, Sophie and Karissa embark on a journey through a world of magic and wonder with evil lurking in the shadows.

While these heroines prepare to fight, there are two on the side of evil who will stop at nothing to tip the scales in their favor. In battle there are wins and losses but what will the girls have to sacrifice to see victory…

The author promises that there are many more adventures to come.

“This is just the very start of the girls’ adventures and fantasy seekers have many more books coming their way. The series will also continue to explore the internal and external struggles each girl faces, which will simultaneously allow young girls to explore the issues in their own lives. This truly makes it fiction for real life,” Ross adds.

Early reviews for the book have been extremely positive. For example, reader Michael comments, “I was pleased with the story line. The overall flow and continuity is very consistent throughout. I think that this story has the potential to appeal to a variety of ages because the vocabulary used doesn't require the reader to have a dictionary/thesaurus on hand, nor is it so elementary that it limits itself soley to one demographic. Can't wait for the next one!”

“Young girls need all of the inspiration they can get and my narrative will certainly get them thinking. It’s a wonderful story for all teenagers – so start the adventure today!” Ross concludes.

‘Daughters of the Lost World’ is available now: http://amzn.to/1m3jfRB.

About K.N. Ross
K.N. Ross was introduced to the wonderful world of books by her mother at a very young age. As a child she spent most of her time exploring libraries and buried in stacks of books. This sparked a deep interest in reading and later writing fiction. Ross now resides in the outskirts of Chicago, IL with her two young daughters. 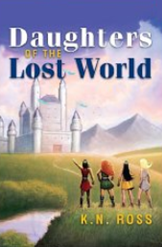