New York Filmmaker to Make 'Sin', a Film on Controversial Subject of Gays in Iran

Will This Film Help Change The Minds of Millions Around the World?

New York City, NY -- (SBWIRE) -- 09/25/2012 -- Filmmaker Wajahat Ali Abbasi is gearing up to make the feature film “Sin”, inspired by a true incident where two boys were hanged to death because they were in love. This brutal, public killing took place In July 2005 witnessed by thousands of people in Iran. Pictures and videos of this incident were uploaded on the internet by spectators, but the Iranian government and media denied its occurrence.

Wajahat, through the cinema screen, will bring the tragic tale of these boys to life, while addressing an important question why in some societies people are denied the right to life because of their sexual orientation.

To make this film possible Wajahat has turned to no other than the popular crowdfunding site kickstarter.com, where their fund raising campaign has recently started. Kickstarter is the biggest funding platform on the internet for creative projects where anyone can support projects by making donations.

Wajahat says, “Kickstarter is the best way to fund ‘Sin’ because of some important reasons: Firstly, through Kickstarter, ‘Sin’ will build its audience worldwide, secondly, individuals who believe in this project will assist in spreading the word, and thirdly, crowdfunding will facilitate this project to take creative risks, and deliver a vision like few others have ever attempted”.

Iranian president Ahmadinejad, in response to gays in Iran, said during his 2007 visit to Columbia University in New York, “In Iran we don't have homosexuals like in your country”. While Iran is in total denial of the existence of homosexuality like many countries in the world, it will be interesting to see the world’s reaction to this controversial movie and how it will impact global public opinion on this issue.

‘Sin’ will be shot in English with a few words of Persian. Dubbed versions in Persian, Spanish, French, Chinese, Hindi and Arabic will also be made so that this story can reach out to larger audiences worldwide.

To learn more about this movie, visit its Kickstarter page at http://www.kickstarter.com/projects/wajahat/sin-inspired-by-a-true-story

If you would like more information about this movie, or to schedule an interview with Wajahat Ali Abbasi, please contact: Ansab Khan at 917-755-9559, or email: contact@sinmoviesite.com 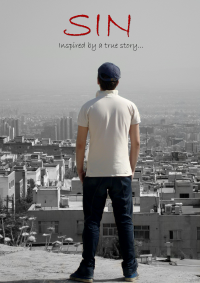