New York, NY -- (SBWIRE) -- 03/04/2016 -- NewYorkSportsConnection.com, a local web-based clearinghouse for youth sports resources in New York City, is sponsoring its second-annual essay contest to encourage middle- and high-school students to learn about and promote the values of sportsmanship and fair play. The contest launched March 1 and will end on April 30, 2016. Winning essays will be chosen by a panel of judges, and announced approximately two weeks later, depending on the number of entries received. Winning entries in each age-group category will receive cash and/or prizes totaling $500. This year's contest is presented with support from Modell's Sporting Goods.

To enter the contest, a student must be a legal resident of one of the five boroughs of New York City, and between 12 and 18 years of age by the entry deadline. Students must write and submit an original essay of between 400 and 500 words. The topic for this year's contest is "What Role Does Sportsmanship Play in Youth Sports." Authors should include their definition of sportsmanship and are encouraged to share a true story of good sportsmanship that they observed or were a part of.

Entries may be submitted at https://www.newyorksportsconnection.com/nysc-essay-contest until midnight, Eastern time on April 30, 2016. There is no fee to enter. Work must be 100% original, never before published, and not entered in any previous contest. Entries will be judged on emotional impact, use of the theme, grammar and spelling, and writing skills appropriate for the author's grade.

"Last year was our first time doing an essay contest and we were overwhelmed by the number of essays we received. The judges and I were extremely impressed by the quality of the writing and the emotion expressed by the authors," says Aaron Finkel, founder of New York Sports Connection. "We received entries from student athletes in every borough, and this year are hoping to get even more kids involved," says Finkel.

Joining the judging panel for 2016 are Olympic fencer Tim Morehouse, and Kym Hampton, a former center with the WNBA's New York Liberty and a current Community Ambassador for the team.

Morehouse, a New York City native, won the Silver Medal at the Beijing 2008 Olympic Games. He is a three-time Olympic team member and and two-time individual U.S. national champion. "As youth sports continues to grow in America, I'm so honored to be a part of New York Sport's Connection's essay competition, which shines a spotlight on the importance of sportsmanship," says Morehouse.

A state track champion in high school, and a college basketball standout, Kym Hampton played professional basketball in Europe and Japan for over a decade after college. Returning to the U.S. in 1997, Hampton was drafted in the first round of the WNBA Elite Draft, the fourth pick overall, by the New York Liberty in the team's inaugural season. She and the Los Angeles Sparks' Lisa Leslie tipped off the first-ever WNBA game on June 21st, 1997. Hampton went on to play three seasons as a center for the Liberty before retiring with knee problems in 2000.

Returning to the panel is Craig Carton, co-host of the Boomer and Carton show on WFAN Radio, and founder and director of TicTocStop, a foundation that funds medical research for children and adults with Tourette's Syndrome.

Over $2,800 in prize money was awarded to twelve winners and finalists of the 2015 edition of the contest. In-kind and cash sponsorship opportunities are still available for sponsors that wish to align themselves with educational excellence, sportsmanship and youth sports in New York City. Sponsors may receive exposure online, in public relations materials, and in an e-book of winning entries. Custom sponsorship packages are also available.

For more information about supporting sportsmanship in student athletics with a cash or merchandise sponsorship, contact Aaron Finkel at aaron@newyorksportsconnection.com.

About NewYorkSportsConnection.com
Founded by a Manhattan father of two young athletes, NewYorkSportsConnection.com is the most comprehensive interactive resource for families and youth sports organizations in New York City. Users can search for information on sports leagues, teams, classes and activities, ask questions of others in the community, and read pertinent content on the local sports community. The site's Weekly Sports Alert email keeps members up-to-date on upcoming deadlines for tryouts, sign-up/registration periods, clinics, camps and other sports-related events. 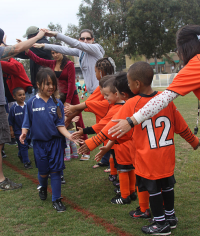