Nicholas Periat & Kevin Douglas Seek Crowdfunding via Kickstarter for the Laminar Bowl: Keeping Flavorful Fluids in the Bowl Where They Belong

No more cereal milk splash or soup overflows thanks to the Laminar Bowl.

Bay City, MI -- (SBWIRE) -- 10/16/2014 -- Nick and Kevin consider their Laminar Bowl sleek, cool, maybe a bit nerdy but awesome. That’s because their invention insures no more splattered soup, milk or other delicious liquids we all enjoy from a bowl.

All credit is due to the center sphere which eliminates spills and splashes from cold cereal, hot soup and everything in between. The idea of the Laminar bowl was born from Nick’s inability to pour milk on his cereal without splashing some on his counter; a problem everyone can relate to at one time or another.

At first glance The Laminar Bowl might seem ideal for children but adults can also benefit from the mess-free approach to one’s next meal. Their bowl could even be considered an educational tool as kids can learn where to pour their own milk to saturate their cereal without soaking the kitchen table or any counter. The bowl’s sphere gives kids (and adults) a target to help them pour their favorite liquid where it needs to go to insure it doesn’t go anywhere else. That’s thanks to the patent-pending spherical design in the center.

Adults still unaccustomed to the early morning start to their day can use the Laminar Bowl to help them make the mark with their milk on their cereal if they’re too bleary-eyed to find the bowl in the early-morning dark.

How does it work? When the milk, soup, etc, hit the middle sphere shaped area of the bowl, fluid clings to the sphere and flows to the bottom of the bowl filling the bowl from the bottom instead of spilling over.

The walls of the bowl are also designed to keep the bowl from tipping over even if a child has the novel idea to press on the side of the bowl. The design is clever enough to prevent most any kind of spill while still being modular enough to be stackable with almost any kind of bowl in any cupboard or cabinet.

Crowdfunding is sought for production tooling enabling Nick & Kevin to produce the Laminar Bowl in mass quantities. They need to buy the injection molding tool for production runs of the bowl in sufficient quantities for the masses. Prototypes of the bowl have been tested and proven to work very well. In addition to raising money, this designing duo is looking to the Kickstarter community for feedback and support to make their design the best it can be.

This crowdfunding campaign ends on November 10, 2014. 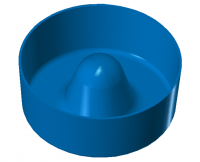 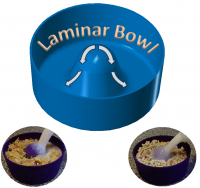 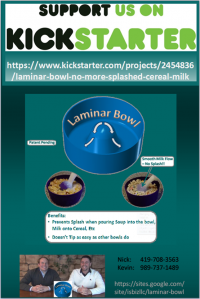