It’s hilarious, unique and boldly thought-provoking. Having already stormed the scene with ‘Tales From Little Lump - Alien Season’, Jeff Folschinsky is back with ‘Tales From Little Lump - Night Of The Undead Snow Monkeys’. Nobody wants their small Texas town to be invaded by undead Japanese Snow Monkeys; especially Gertie, who has ruffled their vengeance-filled feathers and now has to fend them off with the few resources she has left. Critics have already hailed the narrative “one of the most original, inviting reads seen in a long time”.

‘Tales From Little Lump - Night Of The Undead Snow Monkeys’ is about as unconventional as a fictional narrative can get. But that’s okay, because Folschinsky is an unconventional author who tossed the rule book out of the window long ago.

They came in peace, unfortunately the good folks of Little Lump, Texas didn't get the memo. They’re really embarrassed, especially Gertie who managed to shoot down several of the alien’s space ships with her holy land-to-air rocket launcher. Little did she realize in doing so that she would be unknowingly creating a far bigger danger for Little Lump that could spell doom for them all.

To her and everyone else’s disbelief, undead Japanese snow monkeys are slowly approaching the town and now Gertie and Cousin Tommy must fight their way to safety through the undead simian horde who seem to have a real bone to pick with Gertie. With ammunition running low and few places to hide. Gertie will have to use all of her wits to survive the night.

This is the second book in the hilarious Tales From Little Lump series.

“The series’ undercurrent is one of fun, adventure and utter misfortune. What makes things even more fascinating is that the ‘victims’ come from what could be the world’s most unassuming town,” explains Folschinsky, himself a native Texan. “Little Lump is a pretty unlucky place. First aliens, now Japanese Snow Monkeys; what next?!”

Midwest Book Review commented, “…one of the most original, inviting reads seen in a long time and is very highly recommended for any who love unique writing and humor that just doesn’t quit.”

A representative from Indie Author Book Reviews seconded these sentiments, adding, “I laughed out loud several times during the book...”

Folschinsky hopes that his work breathes fresh blood into a fiction market that has become somewhat stagnant.

“It’s all vampires, werewolves and monsters these days. I’m trying to bring back some of the more classic elements of Science Fiction while also injecting heaps of off-the-wall hilarity that make the narratives a million miles from home – a bit like the creatures who come to visit Little Lump!” he adds.

About Jeff Folschinsky
Jeff Folschinsky, who is originally from Houston, Texas, now resides in Los Angeles, California. He is the author of the humorous short story site, "Amused to Death". He is also co-editor of the literary journal, "Eclectic Voices".

His plays have been seen at various theaters across North America. He is also creator and staff writer for Perilous and The Trials and Tribulations of Vicky Vixen, a serial late night soap opera spoof at the Eclectic Company Theater in North Hollywood, California. Jeff's play "The Unsinkable Bismarck, A Pill By Any Other Name Is The Wrong Dosage, Rendezvous and Revelations and Kisses From Abroad" are published by One Act Play Depot. His full length play "Turkey Day" that had it's world premiere at The Eclectic Company Theatre, is published by both Norman Maine Play Publishing and Big Dog Play Publishing. His play he co-wrote with Tyler Tanner "The Singing Bone" is published by JAC Publishing.

Jeff has also written a movie with Tyler Tanner and Stephanie Wiand called Revenge of the Bimbot Zombie Killers which was directed by Joe Camareno. 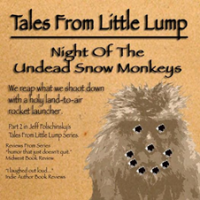