Rock singer VITNE has teamed up with guitarist Julian Angel to give you something new to headbang to this winter. For hair metal, glam, visual rock fans.

Oslo, Norway -- (SBWIRE) -- 10/23/2013 -- Rock singer VITNE has teamed up with guitarist Julian Angel to give you something new to headbang to this winter. In his debut album, VITNE offers up a host of hair metal and glam rockers with heavy influence from Japanese rock, giving 'Neon' a unique attitude and sound.

The album will be available December 3rd, 2013, as download, CD and limited edition USB. The glass USB version contains extras such as 2 bonus songs, pro-designed lyrics digital booklet, original CD art, and more (it even glows red when you plug it in). The USB will be available in limited quantity and is now open for pre-order via www.VitneStore.com.

To follow up the success of the first single, 'Destroyer' (which recently won Best Music Video in August by the Akademia Awards), and to kick-start the countdown to release day, VITNE on October 20th released the album's second music video and single, 'Silhouette'. (http://www.youtube.com/watch?v=q3MvXd-s69k)

Fans of hair metal, glam, and visual rock...get ready to rock this winter in Neon.

About VITNE
Teamed with lead guitarist Julian Angel, VITNE brings you a style of rock music greatly influenced by hair metal and Japanese rock. From heavy hitters to heart-felt ballads with soaring guitars, VITNE's "Neon" is sure to please rock fans. 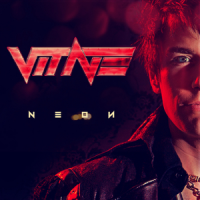