Not So Long Ago, Not So Far Away: Author Trisha Slay Adds Fangirl Twist to Her Debut YA Novel

With Disney now in control of Lucasfilm Ltd and the promise of further Star Wars films on the horizon, Trisha Slay’s compelling new novel is poised to help thousands of young adults connect with the Star Wars institution and the bold roots of its culture.

Dahlonega, GA -- (SBWIRE) -- 08/15/2013 -- In 1977, the epic opening text crawl of ‘Star Wars Episode IV: A New Hope’ graced thousands of theatres around the world and a new chapter of film and cultural history was born. Seven films and billions of dollars later, the acquisition of Lucasfilm Ltd by Disney dawns a new horizon for the franchise that is now synonymous with cult.

With a fresh movie planned for 2015, a new generation of young adults are about to become hardcore Star Wars for the rest of their lives. To prepare them for what is in store, author Trisha Slay has announced the release of ground-breaking new book.

‘Not So Long Ago, Not So Far Away’ – a quirky contemporary, coming-of-age novel set during the earliest days of the Star Wars fan phenomenon – is poised to resonate with old fans and young people around the world.

It's a terrible thing to live under a question mark.... When Erika's best friend, teen beauty queen Cassandra Abbott, disappears during the early hours of Memorial Day 1977, Erika isn't exactly surprised. After all, they've been plotting and planning Cassie's escape for months. But then Cassie's departure unleashes a whirlwind of questions, suspicions and accusations that Erika never expected. She's lying to the police. She's being bullied by older students. Worst of all, she's starting to doubt she ever REALLY knew Cassie Abbott at all. Under the weight of scrutiny and confusion, Erika struggles just to breathe...until a strange new movie transforms her summer with A New Hope. For Erika, Star Wars changes EVERYTHING.

So she volunteers to do chores for a local theater owner to gain unlimited access to a galaxy far, far away from her current reality. At the Bixby Theater-a beautiful but crumbling movie palace from a more civilized era-Erika discovers new friendships, feels the crush of first love and starts an exciting new romance with Super 8 film making...but she can't hide in a darkened movie theater forever. As the summer wears on, tensions escalate over the unsolved mystery surrounding Cassie's disappearance. Someone seems to think Erika knows too many of Cassie's secrets. Eventually, Erika must step out of the shadows and, armed only with her Super 8 camera and the lessons she's learned from Star Wars, fight to save herself and the theater that has become her second home.

As the author explains, it is vital to ensure that Star Wars’ upcoming revival is embraced and enjoyed by as many people as possible.

“Since Disney acquired Lucasfilm Ltd in October of last year and announced plans to release Star Wars Episode VII, the fan universe has been buzzing about the future of the Star Wars,” says Slay.

Continuing, “This book will help fans, both young and young-at-heart, connect with the roots of Star Wars fan culture.”

Since its release, the book has attracted a consistent string of rave reviews. For example, William R. O’Connell comments, “Trisha Slay takes the reader on a vivid journey back in time. Her characters are as intense as the story line which weaves nostalgia, mystery and romance into a compelling story.”

Crystal Casavant-Otto was equally as impressed, adding, “I don't remember watching Star Wars and I was born two months after it was released in theaters, but novelist Trisha Slay made me feel as if I had been there in the theater taking in each frame of the film. Slay's novel, Not So Long Ago, Not So Far Away was so well written that I imagined myself a troubled teenager, coming of age and being transformed during the summer months of 1977.”

With the book expected to see increasing demand, interested readers are urged to purchase their copies as soon as possible.

About the Author: Trisha Slay
Trisha Slay lives in Dahlonega, GA - very close to the epicenter of the first major US gold rush. She divides her time between making sure this country has thousands of opportunities to pause for refreshment every day and working on her next novel, tentatively entitled Sometimes We Strike Back. She has a weakness for ghost stories, unsolved mysteries, wildflowers and homeless pets. Visit her at http://www.trishaslay.com where she blogs about writing, Star Wars geekery, pop culture and random bits and pieces of life. 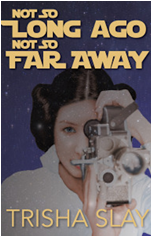