Toronto, Ontario -- (SBWIRE) -- 08/30/2013 -- On September 3, 2012, METRAC (the Metropolitan Action Committee on Violence Against Women and Children) released an updated Android version of its “Not Your Baby” app to help users deal with sexual harassment. It allows users to input where they are – such as work, school or on the street – and who’s harassing them – such as a boss, coworker or fellow student. A response is generated “in the moment” based on the contribution of thousands of other users who shared what they did to deal with similar instances of harassment. “Not Your Baby” also allows users share their personal stories of dealing with harassment.

In the current release, new visual themes are available and new “where” and “when” categories have been added based on user feedback, including “online” and “faith leader”. Since its first release in September 2012, over 5000 users have downloaded the app and it has garnered coverage from media such as The National Post, Jezebel, Ottawa Sun, Mail Online UK, Huffington Post, Torontoist and Bitch Magazine.

The Ontario Human Rights Commission (2011) recognizes unwelcome “vexatious comment or conduct” as sexual harassment. Gender-based harassment, “used to get people to follow traditional sex stereotypes”, is understood as a form of sexual harassment. A 1995 survey found that 8 out of 10 young women were harassed in secondary school and in 2009, research showed that nine out of 10 transgender students and six out of ten lesbian, gay and bisexual students were verbally harassed (Ontario Women’s Directorate, Ontario Secondary School Teachers’ Federation and Ministry of Education; Egale Canada).

Social media and technology may pose its dangers, but “Not Your Baby” demonstrates how they can be used to help people take action, including girls and women, LGBTTIQQ2S communities and other groups at high risk of harassment. It is available on iTunes, Google Play and by visiting METRAC’s website. METRAC is an award-winning, community-based charity that prevents violence against women and youth. Founded in 1984, METRAC works with communities to make them safer for women, youth and everyone. 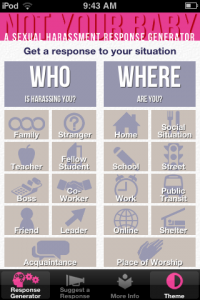 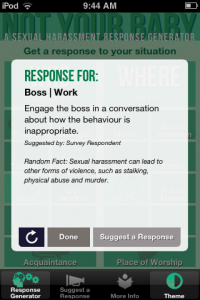