Hemet, CA -- (SBWIRE) -- 05/25/2018 -- Fifteen years ago, Monika Kerber rescued a pregnant Palomino mare who was about to be sent to a slaughterhouse because of a fractured foot, which was later healed.

She named the mare and her offspring, Chardonnay and Chablis, after sweet white wines and gave them a home. Since then she has added 300 animals, including turkeys, ducks, dogs, cats and donkeys.

"It has become my life's work to care for these animals and give them a safe haven to live out the remainder of their lives – whether it is one more year or 20 more," Said Kerber, Villa Chardonnay's president, CEO and founder.

Villa Chardonnay, Horses with Wings, is a nonprofit group that takes in horses that others have deemed worthless.

The equine and animal sanctuary was in Temecula for several years but moved to a 31-acre property in Hemet in September 2016.

"Many people think we are gone just because we moved, but we want everyone to know that we are still here and still making sure all these babies have a legacy," Kerber said.

"A Forever Sanctuary" capital campaign is in full swing and Kerber and her partner, Mercedes Flores, hope to raise enough money to cover their last balloon payment of $1.2 million to purchase the property before its September due date.

The sanctuary's services for special-needs animals cost up to $60,000 a month for food, medicine and other necessities required to maintain and care for the animals. Before joining the cause two years ago, Flores worked with high-risk human patients at an assisted living center in Texas.

"To me, this is the same – this is like a nursing home for animals," she said. "They all have different personalities. It's like when I'd see people who could walk fast, ones with walkers and some in wheelchairs – it doesn't mean you have to put the slower ones down – they can still have a good quality of life."

Unlike animal rescues and shelters that take in horses to rehabilitate and re-home, Villa Chardonnay is a final stop for those that would have a hard time being adopted – either due to a disability such as blindness, deafness or cancer or simply because they are not able to be ridden anymore. This sanctuary has become a forever home for abandoned, abused and neglected animals from other states and countries, such as Canada and Mexico.

Part of Villa Chardonnay's mission is giving back to the community and in partnership with the Pacific Coast Learning Center of San Marcos and APK Serene of Oceanside, the staff and animals at the sanctuary have developed a program to serve adults with developmental disabilities.

The Learning Center's Deborah Varos says that the lives of the special-needs animals parallel those of their own patients.

"They are all living in a place that has given them another chance, and, as a result, they are starting to flourish," she said. "I saw a patient that I have worked with for years who does not communicate verbally actually start to laugh out loud and giggle as he was feeding carrots to the horse. It was an incredible moment."

The first five residents of the sanctuary that arrived 15 years ago are still enjoying a quality of life they would not have had without Kerber's support. She said each of them has a story to tell, as do all the animals at Villa Chardonnay.

Kerber wants people to learn more about the sanctuary and all the good things they are doing and find it in their hearts to help.

"My oldest boy, Dakota, is 41 and he is as happy as a clam here," Kerber said. "It seems like right away, they know they are in a safe place when they come here." 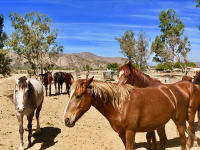 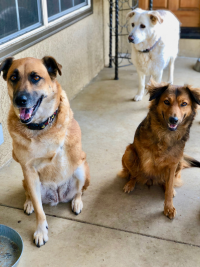