Written by Safari E Ohumay, ‘Nyayo Za Obama’ is one of the few books in the Swahili language that directly focuses on the United States’ history, people, economy and its vital role in the global village. Examining the 44th President’s life from his African ancestry through to the highest position in U.S. office, Ohumay’s diligent research and examination is poised to bring new life to the Swahili language and educate thousands in the process.

Laurel, MD -- (SBWIRE) -- 10/16/2013 -- While over three thousand languages are spoken natively in Africa, Swahili contrasts all others due to its lack of tribal affiliation. However, even with over one hundred and forty million native Swahili speakers, the language often lacks links to the western world. Bridging this vital gap is author Safari E Ohumay, who is breaking new ground by writing his new book about the life of President Barack Obama for a Swahili-speaking audience.

Chronicling President Obama’s life in rich detail, the book is the first of its kind ever written.

As the author explains, his book highlights President Obama’s life in a context that will resonate well with the Swahili people.

“The book discusses Obama’s political success as it were, in the context of a nation that, though still suffers, the social-economic scars of slavery and racial preferences in the treatment of its diverse people, has been steadily changing in many ways for the better, enough to allow the election of its president from a race that was once doomed to slavery and human indignities,” says Ohumay.

Continuing, “It highlights the salient qualities of its kind of democracy predicated on the founding documents and economic freedom which makes it a constitutional model and the market of the world; it informs about the nation’s history as the most charitable nation in the world and the champion of the rule of law and equal opportunity for all.”

Ohumay also hopes his book will advance the notoriety and prevalence of Africa’s most unique language.

“Swahili is the lingua franca of several nations in Eastern and Central Africa regions of the continent, and the most important African language south of the Sahara desert. I want to help advance this unique language to the level of Africa’s choice national language. It’s the only African language with no tribal affiliation; a truly Afrcan language many have adopted due to its proud history and traditions,” he adds.

About Safari Ohumay
Safari Ohumay was born in Tanzania, graduated from the university of DaresSalaam in early 1972 and later studied in the US for a graduate degree in Business Management and returned home after graduating in 1976. Two years later he received a job offer from the World Bank Group in Washington through the prestigious Young Professional Programme.

For the next 18 years that followed he travelled extensively to many parts of Asia and Africa as the World Bank’s Programme manager focusing in Infrastructure and Urban development of countries such as Burma, Bangladesh, Indonesia, Srilanka in Asia, and South Africa, Malawi, Kenya,and Swaziland and Tanzania in Africa. Safari is now a US citizen who lives in the Washington surburb of Maryland. 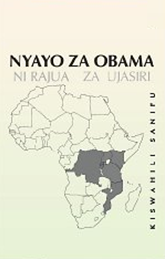