NYCE: An Inspiring BLIND East Coast Rapper to Watch in 2014

Everyone is asking who the next big rapper will be, and newcomer NYCE tops the list of best hip hop artists to come onto the scene in years.

New York, NY -- (SBWIRE) -- 01/17/2014 -- The music industry has always got its eyes and ears open for who’s next up to bring some flavor to the rap music game. A search on the Internet offers up several names and talented newcomers, but NYCE is leading the pack of next generation hip hop stars.

NYCE is an impressively strong lyricist who knows how to deliver the kinds of contagious beats and catchy rhymes that record producers look for. This Queens, native is among the best new rappers in 2014 with a growing fan base and a fresh message.

"My music allows me to express myself no matter what emotion I’m feeling," says NYCE. “I want to make positive inspirational music that everyone can relate to.”

NYCE, born Derrick Anderson has overcome a lot to get where he is today. He was born with Retinoblastoma (Rb) which is a rapidly developing cancer that develops from the immature cells of a retina, the light-detecting tissue of the eye. The disease left him blind, but did not stop him from making music. "Being blind has only made me stronger, says NYCE, "and more determined to reach my goal of being a successful artist."

NYCE grew up around music; taking piano lessons at age 5, as well as playing the drums and singing in his church choir. At age 13 he started recording music with his cousins and some of his friends who later encouraged him to put out his first mixed tape entitled: The Interruption. The mixtape immediately caught on and resulted in impressive view counts on YouTube and more than 20,000 followers on Twitter. He is currently working on his independent debut album Evolution, which will be released in May.

NYCE has been compared to Lil Wayne who is one of the world’s top selling rappers despite the fact he is epileptic and has had several seizures throughout his career. Lil Wayne continues to tour and inspire fans as he lives with his condition. Likewise, NYCE is not letting a disability stand in the way of his music.

“It is an exciting time for making music,” says NYCE. ”I love what I do and plan on bringing new styles, new perspectives, and fresh musical approaches to hip-hop.”

NYCE has performed many times on the East Coast, attracting great reviews and fan growth that is sure to double his concert schedule for 2014. Look forward to seeing and hearing NYCE on TV, in the news, and on the radio in the year to come. He is an exciting and vibrant new artist who adds color and diversity to the hip-hop scene. To hear more of his music, visit his iTunes site online.

About NYCE
NYCE was raised in South Jamaica Queens in a private house by his aunt who he considers to be his mother. He was born with Retinoblastoma (Rb), which is the most common malignant tumor of the eye in children. NYCE has persevered and grown as a rap artist in the music industry despite the fact he is blind. 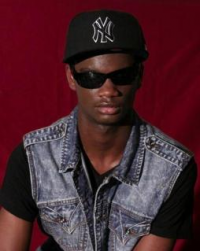