New York, NY -- (SBWIRE) -- 02/28/2014 -- When a legendary man of great honor dies, the whole world weeps. On December 5, 2013, Nelson Mandela did not only leave the world free – he left the world longing for more leaders like him. “Although we knew that this day would come, nothing can diminish our sense of a profound and enduring loss,” said South African President Jacob Zuma.

The founding president of democratic South Africa peacefully passed away at his home in Johannesburg. The incumbent president further stated, “Our nation has lost its greatest son. Our people have lost a father.” Nelson Rolihlahla Dalibhunga Mandela, also known as “Madiba,” carried a lot of titles: a father, husband, global hero, an advocate of human rights, revolutionary, anti-apartheid leader, prisoner, and revered statesman. Zuma said, “his tireless struggle for freedom earned him the respect of the world.”

At a young age, Mandela has showed courage to fight for freedom, for what is right. Mandela once wrote in his autobiography, Long Walk to Freedom, “I have no epiphany, no singular destiny, no moment of truth, but a steady accumulation of a thousand slights, a thousand unremembered moments, produced in me an anger, a rebelliousness, a desire to fight the system that imprisoned my people." He was imprisoned for 27 years for fighting against apartheid in South Africa. After being released from prison, he eventually led his country after a historic democratic election.

Leaders from all over the world attended his state funeral on December 15, 2013. Presidents, prime ministers, royals, celebrities and even ordinary South Africans said farewell to a man who is a global icon of reconciliation. Praises to the late great South African leader were heard.

Obama regarded Mandela as his own inspiration for pursuing politics. Obama, who is also a nation’s first black president, pointed out that his death should provoke self-reflection. In his tribute speech, the US President stirred the people to apply his (Mandela’s) lessons to life. "We will never see the likes of Nelson Mandela again," Obama pointed out, causing uproar in the crowd.

In an interview, Obama was quoted saying, “I always tell people to go read some of Dr. King’s writings about the African-American community. For that matter, read Malcolm X. . . .” He believes that there are issues of personal responsibility that must be tended to, while recognizing that what’s happening in the African-American community is an immediate consequence of our history. Obama thanked the people of South Africa, “for sharing Nelson Mandela with us,” who he also called a “giant of history.”

The world may have lost a great leader and mentor, but Mandela’s legacy lives. Nelson Mandela Online showcases more about the late president’s life and works. The website not only hopes to promote his legacy, but to inspire people to keep living Mandela’s dream.

About Nelson Mandela Online
Nelson Mandela Online is a one-stop online resource for everything about Nelson Mandela’s life, his legacy. One who wishes to know more about the late revolutionary leader will be able to browse through his biography, autobiography, quotes, movies, pictures, timeline, books, and trivia on this website. Links to other resources about the late South African president can be seen. The website was put together as a fan page to make it easy for people to learn more about Mandela. 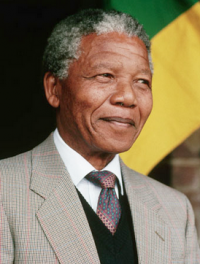