Memphis, TN -- (SBWIRE) -- 03/07/2012 -- 5 time Karate/Kickboxing Champion Anthony “Amp” Elmore of Memphis, Tennessee announced today that the perfect Tuxedo for President Obama’s 2013 Inaugural celebration is in production. Republican front runner and Presidential hopeful Mitt Romney would say; “ Mr. President not so fast with the Tuxedo because I am the only person who can beat you in this year’s Presidential election.” Who could deny how beautiful and exciting the President will look in this exclusive original designer styled Tuxedo? On March 8, 2012 President Barack Obama will host Ghana President John Evans Atta Mills in the oval office. The Tuxedo in the picture was made in Ghana. Elmore is the innovator of a new art form called the “Safari Initiative.” The Safari Initiative was started in Kenya and perfected in Ghana. Safari is an acronym meaning “Styled African Fashioning Application Renaissance Integration.” The Safari Initiative is an art and science that transforms the current skills and crafts used in Africa into 21st Century products perfected so well that even the most powerful leader in the world will endorse such a product. The product producer is Anthony “Amp” Elmore owner of Elmore Carpets & African Imports Memphis.

After President Obama’s Presidential win in 2008 Elmore consigned his Ghana production team in Accra, Ghana to produce an African Styled Inaugural Tuxedo for President Obama. Elmore have been working with Ghana Crafts people since 1998. The Ghana team quickly produced the garment and shipped it to Memphis, Tennessee. Elmore asked his 9th District Congressman Steve Cohen to deliver the Tuxedo to President Obama. The Whitehouse accepted the Tuxedo Jacket and President Obama sent Elmore a thank you note. It is no small task getting a Ghana product to a U.S. President. Whether making a product for the United States President or John Q. American citizen Elmore notes; we must bring African Style to a 21st Century paradigm.

What better way to highlight African Influence and style on the World stage than to have President Barack Obama to model and introduce “African Style to the world. Elmore notes that singer Elvis Presley had African furniture in his home. The world knows about the Jungle room in his home in Memphis. That is African styled furniture.

Elmore is asking Ghana President Atta Mills, all African and African American people to give hope and change a chance by encourag-ing the President to wear a beautiful garment that is inclusive of African culture. More importantly President Obama can help to create jobs and industry via wearing a garment with African Influence. Makers of handcrafted African cloth are single households busi-nesses. The cloth in the picture was made in Mali. A cotton grower grew the cotton, perhaps someone spun the cotton into yarn. The yarn was purchased by a family that processed the yarn with fruit dyes and fermenting the mud and making a caustic soda to bleach the fabric. A broker purchased the fabric in Ghana and sold it to a merchant at the Ghana Art center. The material went from the art center to a Ghana tailor where it was configured into a Tuxedo. FedEx or KLM made money shipping the garment. The Garment gets to Mem-phis and a small business earn income selling the garment. President Obama purchased his 2009 Tuxedo made by the 125 year old union shop Hart Schaffner Mark. The Tuxedo sells at Nordstrom Department Stores for $895. Many small African American businesses sell African Garments out of a suitcase trying to make a living. African Influenced products gives small business owners an opportunity.

Elmore who had a paid for home and store was so convinced regarding creating jobs and industry in both Africa and America that he mortgaged his life away by creating the 1st “All African Home in America.” Elmore spent a half year in Ghana furnishing his 5000 square foot home in America using African craft people. Despite the craft people having no roof, running, water, electricity we were able to product quality products equal or superior to furnishings in American homes. We can create thousands of jobs and give small business people an opportunity get into the American multi-Billion dollar furnishing game. We have more than an idea we have an actual model. We have more African and 21st Century African furnishings in our home in Memphis than any home in world including Ghana. In 2007 Ghana minister of tourism and culture the honorable Jacob Okanka Obetsebi-Lamptey visited the home and commented that this was his vision of African Influence in America and no home in Ghana had such inspiring African culture.

In 2007 Elmore had the opportunity to speak with Liberian President Ellen Sir Leak Johnson in Memphis he invited her to see his Safari home during her Memphis visit. She instructed her ambassador to visit the home, but the Ambassador never showed. Elmore had the opportunity to present the African style Tuxedo to the prestigious American retail store “Saxs Fifth Avenue.” Sax C.E.O. Brad Martin asked the President of Sax’s to look at marketing the African Style Tuxedo.

Brad Martin offered Elmore the opportunity to show his African style creations at a “Trunk Show.” This is a special showing to select customers. Elmore notes that we are confident that we can produce great products we must get African countries to produce quality 21st Century goods. On February 7, 2012 Elmore met with Ghana Ambassador Elkanah Odembo. Elmore to encouraged the Ambassador to have the Kenya Akambas who are master carvers to adopt his Safari initiative to help create jobs in Industry in Kenya. Elmore notes that many African leaders cannot see this vision and they are relying on AGOA or the African Growth and Opportunity Act that opens the door for Sub-Saharan African countries to trade in America. President Obama and President Mills will discuss AGOA. Elmore notes that AGOA of only part of the answer. The answer to more trade for Africa is for Africa to make more beautiful and better products at a cheaper cost. That is what is our Safari Initiative.

Elmore meet with Ghana Ambassador at Dan. Ohene Ogyekum at Congressman Cohen’s office in 2010. Click on picture see video Memphis 21st Century regarding the Safari Initiative and trade with Africa.

President Obama’s 2013 Tuxedo is already in Production. We are asking Ghana President Atta Mills to encourage President Obama to consider a Tuxedo that is truly African grassroots, Mud, culture and a way to help not only African people but create jobs in America. 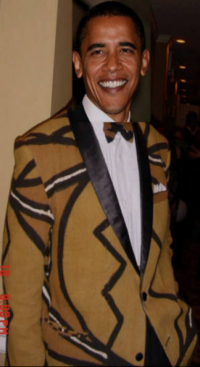