Unsuspecting Products We Use Everyday That Could Be Making Us Fat

What you might not know could be making you fat. Leah Zerbe, Online Editor for Rodale.com, has researched this subject extensively and will join Smart Health Talk Thursday, August 30th at 4:00 pm PST so we can better understand how they get in our bodies.

San Bernardino, CA -- (SBWIRE) -- 08/30/2012 -- If taking weight off wasn’t hard enough, the 80,000 or so chemicals used in everything from food to shampoo could be forcing our bodies to do things that can also make us fat. Like we need something that we didn’t even know was there, that can cause us to make more fat cells in our bodies, and not just any fat cells but fat cells that can store even larger amounts of fat, and at a time when we are facing the largest obesity rates in history.

Obesogens as they are called, confuse the body’s nerve centers by sending false messages. They take up docking stations that are only meant for something our body made for that purpose and not outsiders. Their presence prevents insulin and hormones from taking their place and keeps them in the blood at high concentrations. With docking stations full, our bodies are tricked into thinking it should decrease production of key hormones. Low hormone levels can have a negative impact on overall health and the body’s ability to defend itself.

When the docking stations become full from phthalates and take the place of our own hormones, high blood concentration levels of insulin, glucose, and hormones accumulate and can damage vital organs and lead to other disease conditions.

Numerous sources can be identified with high levels found in pesticides on food and personal care products, and even air fresheners and detergents. Packaging can also contribute to phthalate load with chemicals of its own.

Obesogens have been associated with increased cancer risk.

Before this week it was thought that the primary mechanism for phthalate induced breast and prostrate cancer tumors were hormone based. The Environmental Working Group (EWG) had reported that phthalates are known animal endocrine system disruptors.

A new report is saying that phthalates just got potentially deadlier with the release of information on their ability to trigger other types of tumors using previously unknown mechanisms.

New research just released on August 27th in the FASEB Journal has found enough evidence to suggest there is another pathway phthalates can promote cancer that does not involve hormone receptors. In other words there are even more ways phthalate exposure can give us cancer.

This new information is cause for concern since Americans are ingesting and applying chemical additives on our bodies in even higher concentrations.

Just look at a food or shampoo label to find a long lists of man made chemicals as ingredients. Same with air fresheners. What’s even more unsettling is what is missing from the label, but is really there in the product. Phthalate ingredients are not required to be listed on product labels even when they are present in the formula.

Women using multiple beauty products are especially vulnerable. After lotion, shampoo, crèmes, make up, and hair spray one estimate reported by Reuters in a November 2009 poll of 2,016 women by personal care products manufacturer Bionsen was that the average woman wears around 500 chemicals each day. That is just on the outside of their bodies.

The President’s Cancer Panel tried to warn us when they came out with a list of food and environmental toxins that we could be increasing our cancer risk. You don’t hear much about the report because most of the products containing those ingredients are made by 10 companies that control most what is found on supermarket and drugstore shelves and they don’t want to advertise their use and the risks associated with them. Doesn’t make for happy customers when they find out what they have been unknowingly exposed to in products they trusted.

How does antibiotic laced meat sound for dinner? With 80% of antibiotics produced each year going to animal production, it’s not a matter of if, but when we will have to pay the price for this obvious abuse of the drug.

Reports of people getting sick and dying from bacteria that can survive even our strongest antibiotics increase each year. According to a report published in the July issue of Infection Control and Hospital Epidemiology, the journal of the Society for Healthcare Epidemiology of America, cases of methicillin-resistant Staphylococcus aureus (CA-MRSA), a potentially deadly bacterial infection that is resistant to antibiotic treatment, more than tripled between 1997 and 2006.

Farmers add antibiotics to animal feed daily because it allows them to fatten up livestock quicker even though they keep them in stressful, crowded and inhumane living conditions that make animals sick. Farmers cannot allow a sick animal into the food system so if they do get sick, they need special treatment, and cannot be slaughtered until they recover. Sick animals increase work and expense for the farmer. This is especially true for large industrial operations. Crowded factory farms also provide the perfect conditions for the spread of salmonella, a potentially deadly public health risk.

Could we also be fattening up humans with antibiotics and obesogens in foods and personal care products?

Leah Zerbe, Online Editor for Rodale.com believes regular use of antibiotics to treat conditions that don’t even involve bacteria, together with ingestion of meats from animals that have been fed antibiotics their entire lives is making children and adults fat. She also sites the widespread practice of allowing chemicals that have undergone limited safety testing in products for adults and children.

After reviewing the research, Leah wrote several articles explaining how obesogens coming from antibiotics and other chemical sources are messing with our hormone and insulin levels. Not only are we getting fat, but ingesting these obesogens puts our body in a constant state of defense and is causing unpredictable cross chemical reactions.

Tune in to Smart Health Talk this Thursday, August 30th from 4-5:00 pm PST as Leah Zerbe joins us to explain what obesogens are doing to our health and how to avoid them.

Anyone can listen to the show live from anywhere in the world. Go to KCAARadio.com and click on top left hand corner icon that gives you the option to watch the show on USTREAM or listen on “Tune In.” If you have a “Tune In” radio app on your phone you can just type in “KCAA Radio 1050 AM” and listen like you were in the studio with us. If you miss a show you can catch up with podcasts are on KCAARadio.com when you click Elaine McFadden’s picture, or you can find them on the SmartHealthTalk.com website under “podcast tab.”

Please note that this press release has been revised from its original content. 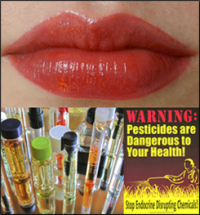