Through compelling drama, two male survivors are faced with the aftermath of their childhood sexual abuse.

Nashville, TN -- (SBWIRE) -- 04/16/2014 -- ‘Ocala’ is a feature film that portrays the desperate condition two men find themselves in after suppressing secrets from their past as survivors of childhood sexual abuse, and the threat that it has to not only destroy their lives, but the lives of those they love.

‘Ocala’ was inspired by one of its Writer’s and Producer’s own personal life and the adaptation of other survivor’s stories. This feature film is a tribute to victims, survivors, and supporters around the world, offering an opportunity for the collective voice of Survivors to be heard. This unique film finds a way to honestly explore the realms of trauma and heartache, while artfully weaving beauty and hope in their midst.

Producer & Co Writer Brett Pack says, “ Ocala has the potential to be a key player in raising awareness about sexual abuse and impacting society’s view of these issues. There are approximately 60 million survivors of childhood sexual abuse in America today, and we have an opportunity to be a voice for them. April is Sexual Assault Awareness Month and we invite individuals to get involved in the Community Voice behind ‘Ocala’ and the Survivors it represents.” Brett is joined by Producers Mark Mathis, Brandon Hirsch, Jeanine Meszaros and Director Matthew Dean Russell, all actively making a way for this film and its message.

Whether one is personally a survivor or someone who is taking a stand with Survivors, sexual abuse impacts everyone on a daily basis is various ways. By joining this campaign and supporting this film, the backers will help turn up the volume of an issue that has been silenced by shame for far too long.

Successful funding will help meet the following expenses:
- Secure elite actors to increase the value of the film in the eyes of foreign market. This will also help pre-sales and distribution deals.
- Fees for submission, casting, contracts, legal requirements, etc. 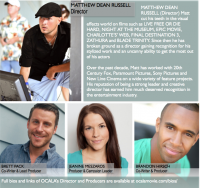