Aberdeen, UK -- (SBWIRE) -- 07/30/2015 -- OLLYI.ON, a rising songwriter, vocalist, and producer, has released his debut single, 'Joy!' The new track employs the artist's Britpop style elegantly infused with funk and reggae influence, a growing hallmark of his sound. The new single is the first taste of his full length studio album, which is slated for release next February.

Unlike many musicians utilizing unique monikers, OLLYI.ON has a desire to keep his personal life away from his music. He shies from the spotlight and wants to let his music take the reigns.

This admirable nature extends to his songwriting, too. 'Joy!' is an eclectic pop track that stays true to its namesake. The uplifting tune dabbles in disco and dance grooves to create an easy-going atmosphere that gets the feet swaying and the dance floor moving.

'Joy!' is coupled with OLLYI.ON's second release as well, an accompanying single called 'Dear World.' The song's mixture of simplistic, yet infectiously catchy choruses is akin to its predecessor, and thus, continues to define the sound that OLLYI.ON will be sharing with the industry in February.

Both 'Joy!' and 'Dear World' are available across all digital platforms. From retailers such as iTunes and Amazon to streaming services such as Spotify, fans will be able to snag a download or a stream of the new tracks. Fans can continue to follow OLLYI.ON on his website, CD Baby, YouTube, and Twitter, all of which can be found below. 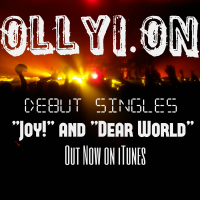