One in a Million Crowdfunding Project Launched

Smart Crowdfunding is slated to carry out strategic marketing initiatives for the ‘One In A Million’ project on Indiegogo. The campaign endeavors to reach a $10,000 goal for the conservation of wildlife.

Overport, ZA -- (SBWIRE) -- 02/25/2014 -- To increase the well-being of wildlife in Africa the Blue Sky Society Trust has launched a crowdfunding project on Indiegogo entitled, ‘One In A Million’. The crowdfunding campaign is poised to raise $10,000 in support of the society’s latest initiative to help wildlife conservation. The monies raised through the project will kick start the ‘One In A Million’ campaign which is designed to bring in $1,000,000 one dollar at a time. This premise makes supporters of the effort a very necessary “One in a Million”.

Bringing awareness to the prevalence of African wildlife poaching that is unfortunately escalating in that part of the world Carla Geyser, Founder of Blue Sky Society speaks to the need, “We want to bring attention to the fact that in 2013 over 1,004 Rhinos were savagely poached, and there are estimates that close to 30,000 elephants lost their lives in 2013. We cannot allow our wildlife to diminish. We can make a difference as we join together with small donations.”

Endeavoring to kick start their ‘One In A Million’ campaign the monies raised by way of the Indiegogo crowdfunding project will go toward various Rhino, Elephant and other conservation projects. These projects will help procure surveillance teams, camera traps, and drones, along with equipment and personnel for ongoing efforts. Additionally, the ‘One In A Million’ project will support a Rhino Orphanage to house orphaned rhinos whose mothers have been the victims of poaching. The project will also make use of Rhino Art to support Rhino protection through children’s artwork. “We need to use education and get into the hearts and minds of the children all over the world– if we are going to win this war we need to all stand together”, says Geyser, “Let us be the generation that tells our grandchildren that we did something to make a difference”.

About Blue Sky Society
The Blue Sky society is a non-profit organization started by Carla Geyser
in 2012 with a mission to create a community of like-minded, passionate individuals that are connected through education and action to worthwhile campaigns. These campaigns are dedicated to help preserve and improve life for people, animals, and communities in need. 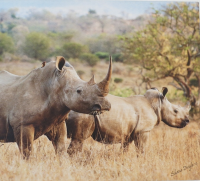