Phoenix, AZ -- (SBWIRE) -- 08/07/2012 -- Salvatore Gencarelle, freelance writer and traveler, announces his new book "A Man Among the Helpers," which chronicles his own spiritual journey to find healing.

Native American culture and religious beliefs have been shrouded in mystery. For centuries people the world over have been instinctively drawn to learn more about Native American Traditions, but only a few have ever fully stepped into the incredible world of Native American Spirituality. Salvatore Gencarelle is one of these few.

At the age of 15 Salvatore became a ceremonial assistant to a modern day Lakota Sioux Medicine Man, the great-grandson of “Chipps”, the adopted brother and ceremonial protector of the famous warrior Crazy Horse. For over 17 years Salvatore was taught Native American Rituals of the Lakota Sioux. He was mentored in the ceremonies such as the sweat lodge, vision quest, sacred pipe, sacred songs and the Sundance. He became what’s known as a “Helper”; a person who works with the sacred powers of the world to assist humanity true health and happiness.

During these 17 years Salvatore also lived and worked on the Pine Ridge Indian Reservation, married into a Native American family and had 3 sons. He was fully immersed into the ancient ceremonial practices and also the modern life of the Lakota people.

From Salvatore’s experience and through spiritual guidance comes the book; A Man Among the Helpers. This book gives a glimpse into his personal journey on the path of Native American Culture and spirituality. He openly shares portions his life experiences and the principles and practices he has learned along the way. Through the book people are introduced to these sacred ceremonies and the concept of becoming a Helper. These sacred ceremonies are gifts to all humankind to help humanity live and continue life upon the Earth.

Salvatore Gencarelle now travels extensively around the world to share his experiences and wisdom with all people, helping other to find balance and health and happiness.

“A Man Among The Helpers” is available in softcover (ISBN 978?1?60264?939?2) and e?book (ISBN978?1?60264?940?8) from Virtualbookworm.com, Amazon.com, and Barnesandnoble.com. This book can also be ordered from most bookstores around the United States and United Kingdom. More information can be found at the author’s website. http://manamongthehelpers.com/

About Salvatore Gencarelle
Salvatore Gencarelle is a photographer, artist, freelance writer, and musician. He travels extensively not only across the North American continent, but around the world to share his experiences and wisdom with those who have the desire to glean the rewards of traditional healing practices. 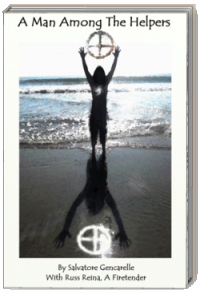