Renowned for her established Broadway career and star of ABC’s hit series ‘Red Widow’, Natalija Nogulich capitalizes on her creative talents with the recent launch of her debut novel. Depicting the fierce battle between revenge and forgiveness, ‘One Woman’s War’ is set to resonate with readers around the world.

Los Angeles, CA -- (SBWIRE) -- 05/14/2013 -- While her name now exists on literature’s eternal bookshelf, many already know Natalija Nogulich for her critically-acclaimed work on stage, television and in film. However, diversifying her portfolio and proving her dominant creativity, Nogulich’s debut novel is already competing with its genre’s best-sellers.

‘One Woman’s War’ was inspired by Nogulich’s Balkan ancestry and the real-world killings that were commonplace in her family’s homeland.

Tragedy strikes a small mountain village in the Balkans when a young mother loses her son. The grief-stricken woman flees to New York City in the hope of healing in the arms of family.

Renewal looks possible until her son's predator's identity is discovered. Her desire for revenge drives our heroine back to her homeland to even up the score. By now the Balkan wars of the 1990's are in full swing. Civil war, passion, love and hate drive the characters to an unpredictable yet inevitable destiny.

As the author explains, her book’s over-riding theme is one of great paradox.

“Revenge vs. Forgiveness - can you think of a country in the world where that is not a predominant theme, especially when civil wars are tearing countries apart? Then there is the personal human revenge we sometimes want to extract from someone in our own lives, even without a civil war. How do we climb higher?” asks Nogulich.

Continuing, “My last visit to Kosovo, between the two Balkan wars in the 90's, found me at gunpoint on a bus traveling from Greece to Skopje. That and more gave me an inside track to uncover some hidden truths about the land, the people, and the potential transformation away from centuries-old traditions that leave a trail of blood in their wake. It all ended up in this book, fused with gripping fiction.”

“One Woman's War is a heartfelt saga of one woman's courage and strength in the face of the terrible tragedy she suffers in her quiet village turned upside down by the cruel divisions of war. Natalija Nogulich understands the worlds of her heroine and paints a loving picture of the once peaceful village where her family has thrived for generations,” says Martha Ferris, who reviewed the book on Amazon.

Kim O’Kelley-Leigh was equally as impressed, saying, “In one word: WOW! You want more? It's compelling, it's raw, it's colorful, and it has a pulpy energy that kept me up reading until four in the morning.”

With its popularity set to soar, interested readers are urged to purchase their copies of the book as soon as possible.

Most recognizable as Admiral Nechayev in Star Trek Next Generation, she continues to act on stage and screen, dividing her time between Los Angeles and Chicago. Also, an Adjunct Professor for Directors and Producers at AFI and Art Center College of Design, she is penning a manual to aid Film Directors in working with actors.

She will appear as Italian journalist Giovanetta Ricci, with Al Pacino and Helen Mirren in SPECTOR, HBO biopic helmed by David Mamet.

Educated in Illinois (Lake Forest College), Spain and Italy, she possesses command of five languages, and looks forward to doing book signings all over the globe. 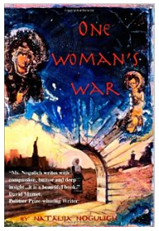