Masterfully crafted by L.A. Long, ‘Operation No Coincidence’ explores one of the world’s most feared situations – the banding together of global terrorist groups. Can protagonists Victoria and Gabriel use their limited resources to produce the overwhelming power required to stop these groups joining forces? This is a unique take on anti-terrorism that could only have come out of the mind of Long.

Yardley, PA -- (SBWIRE) -- 04/24/2014 -- In the past decade, the threat of terrorism has been on everyone’s minds, even if the myriad of groups often deploy only rhetoric to keep the world on edge. However, in a thought-provoking and highly engrossing new novel, author L.A. Long raises the threat level beyond anything imaginable with ‘Operation No Coincidence’.

This gripping and plausible novel plays out in a world where global terrorism groups band together as one, looking beyond their differences to pursue a bold overall ideology. As with any potential best-seller, the responsibility to stop them falls into the hands of two unsuspecting characters.

No drama. That’s what insurance executive Victoria Ashton strives for, but it eludes her at every turn. Just this morning, she foiled a snatch and grab of her laptop. Question is: was that all it was? The witness and investigating officer think otherwise.

The same evening, her on again, off again lover, Gabriel Barnes, materializes from the darkness. He announces he’s retired from the Navy SEALs, home to stay, looking for a wife, children, and the white picket fence.

Victoria’s not fooled. She knows his retirement is no such thing. While the sex is great, she isn’t going to play runner-up to his new Black Ops venture, Under Cover Angels (UCA). UCA is trying to stop the supply arms to Pakistan, human trafficking to the Middles East, and if the bad guys can get the funding, dirty bombs could be heading to the US.

Everything changes when their two worlds collide. Her insurance fraud suspect and his Russian arm’s dealer turn out to be one and the same. Victoria says coincidence. Gabriel says there are no coincidences.

When the case takes an unexpected turn, Victoria and Gabriel must join forces to stop the terrorists before it’s too late.

“Of course, this is completely fictional, but there is actually nothing stopping my narrative from playing out in the real world,” says Long, a veteran investigator of insurance fraud. “It presents the real grave dangers of dissimilar terrorist groups looking beyond their creed, religions and cultures to instead pursue common ideologies.”

Continuing, “We’re not just talking about international terrorists, either. For example, my book showcases what happens when white supremacists on home soil collaborate with Middle Eastern terrorists. These two groups initially have nothing in common but, as readers quickly discover, their combined enthusiasm could prove more than deadly.”

To date, the book has garnered rave reviews. For example, one reader comments, “This is a fun read very well told. From the start I couldn't wait to see how it was going to play out. Adventures with a smart, strong and sexy female protagonist don't come along too often. Ms. Ashton is a very interesting and compelling character. If you're looking for a gripping fresh take on an anti terrorist story, this one is worth reading.”

About the Author: L.A. Long
L.A. Long is an insurance industry executive with a long history investigating insurance fraud. She applies her knowledge of the law, investigation, and human behavior to developing her story lines. She lives in Bucks County, Pennsylvania with her family, three cats and a very human dog. 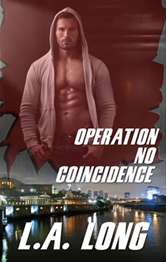