Out of Work: Whip-Smart and Hilarious Debut Novel Details One Man's Rise to the Top

Written by Chris Henry, ‘Out of Work’ will charm anyone who has ever realized that working for a company isn’t the be-all and end-all of life. Laugh-out-loud funny, crackling with energy and featuring a main character that everyone will relate to, Henry’s debut is the beginning of a promising career.

Palmetto, GA -- (SBWIRE) -- 03/05/2014 -- We’ve all been there: rushing to leave work, hurrying to clock out and racing out of the parking lot like we’re being chased by two-headed monsters. Chris Henry noticed this phenomenon while working in a warehouse in Atlanta, and it made a light bulb go off in his head.

“It really sparked my imagination,” says Henry, whose new book, ‘Out of Work’ was released early this year. “We’re supposed to love our jobs, aren’t we? And yet while working at this warehouse, I noticed that almost everyone was breaking his or her necks to clock out. It got me thinking about the world of work, and how sometimes, getting to the top isn’t all it’s cracked up to be.”

‘Out of Work’ epitomizes the phrase: “be careful what you wish for because you just might get it.” Henry’s main character rises to a management position, but soon realizes that everyone he works with hates his guts. In turn, he becomes someone that even his wife doesn’t like – all in a quest to get back at his employees.

Funny, smart and relatable, ‘Out of Work’ is a debut novel from an author to watch.

This is a story about a guy who settled in a position at Allen Shields. After a few years of ass kissing, he got a big promotion that placed him right at the top, except now he's managing a warehouse full of people who hate his guts. As a result, Lionel changed overnight and became the meanest boss anyone could ever work for. Even Lionel's wife could see a change in him. Sheila wasn't happy with the person that he became, nevertheless, she continued to support him. Hate from his employees grew by the day and it didn't take long for Lionel to realize that working as a Plant Manager wasn't what he expected.

Since its publication, ‘Out of Work’ has enjoyed glowing reviews from readers.

“This is a DAMN FUNNY book… I laughed throughout and wouldn’t mind seeing these SAME PEOPLE in another book by Mr. henry,” wrote HRH Spider.

As for Chris Henry, his dreams are different now that he’s finished his first book.

“When I came up with this story, I wanted to encourage people not to settle for less and to go after their dreams,” says the author. “We all have a special gift and sometimes, it takes time to figure out what that gift is. Thankfully, I’ve found mine – writing is what I love to do, and I have a lot more books in the pipeline.”

About Chris Henry
Chris Henry is a native of Atlanta Georgia. He started writing back in January of 2011. Chris is 37 years old with a B.A degree in Information Technology. But writing is his passion and he's very good at it to. He has two novels that's waiting to be released real soon. 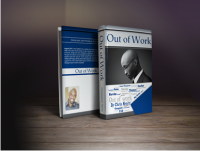