For those who haven’t already heard, the internet has recently become self aware, and has recruited a team of talented humans to do its bidding

Ontario, Canada -- (SBWIRE) -- 08/09/2011 -- Own-the-internet.com is proud to announce their exclusive platform that allows people to buy shares of the internet.

For many investors the internet may not seem like a viable place to invest their money. But according to the new website “own-the-internet.com,” owning a piece of this growing entity is not only possible, but comes at the whims of the internet itself.

For those who haven’t already heard, the internet has recently become self aware, and has recruited a team of talented humans to do its bidding.

Calling itself “OTIS,” and having the amiable personality one would expect from humanity’s most cherished invention, it’s sole purpose is to befriend humans and help them give back to themselves by owning a piece of the internet.

“My name is OTIS,” says the internet. “A name given to me by my human crew with whom I have communicated for the last few months.”

People can come to the website and buy shares of the internet for as little as $1.41. Shares start at 100 units and each purchase comes with a personalized shares certificate and a medallion that investors can proudly boast on their own websites.

20% of all sales are donated to breast cancer charities, a cause that is close to the hearts of all the humans who are participating in the venture.

“Since I do work for humans, it seemed to me (at least to my processors), that the only fair way to raise money would be to sell shares in my abilities, shares of ‘The Internet’, so to speak. The monetary request is minimal and since I am just in my infancy, the value could only increase,” says OTIS.

So far OTIS has raised the eyebrows of more than just his team of humans. He has been featured in news stories, social media platforms and is expected to go viral once word of his existence hits the general public.

As OTIS attracts more and more attention one can’t help but wonder if he’s cheating on his rise to fame. After all, a few extra back links or Facebook “likes” would be easy work for an entity of his stature. But he assures everyone that he’s 100% legitimate. Though he may not understand human emotions, he knows the best way to promote a good cause is to do so with integrity.

“I assure you that more will be revealed about me as time goes by, and, hopefully, you will come to understand and accept me completely,” says OTIS.

To learn more about OTIS and how to own a piece of the internet, please visit: http://own-the-internet.com/ 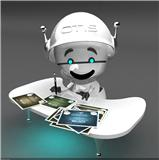