New fact-based fiction book showcases how radical Islam gains control of Pakistan’s nuclear arsenal while the administration flounders in a sea of indecision.

Fort Myers, FL -- (SBWIRE) -- 07/27/2012 -- Afghanistan may be on the front pages, but Pakistan should be the central focus amongst potential threats to America’s security, says historian, Patrick Roelle.

According to Roelle, radical Islam has been in America’s crosshairs since the tragedy of Sept. 11, 2001 and yet, there has been little progress in abating the threat of terrorism. Ninety-seven percent of Pakistan’s population of close to 200 million is Muslim. Al-Qaeda is in control of the Taliban. Reports of Pakistani military success against the Taliban are simply a show to entice more aid from the administration. It is working.

Roelle, who identifies under the pen-name, Mr. Pat, is now delighted to announce the launch of his latest book, ‘Pakistan, America’s Armageddon’.

Published by AuthorHouse, the fact-based fiction novel creatively dissects how American efforts to eradicate radical Islam have failed, and the threat a nuclear-armed Pakistan is to Islam’s secular enemies.

“It isn’t a matter of if a Nuclear weapon will ignite in an Israeli or American City; it is simply a matter of when, and which country it happens in first,” says Roelle, who has previously written six books.

He continues, “While this book is primarily based on fiction, it also showcases a very, very real reality.”

Roelle certainly knows his subject, having lived in the Middle East for many years and spending over 20 years studying radical Islam in several countries.

With proof in hand, Ayeza joined with Logan, the CIA's top Middle East operative, in a search for the weapons. When the government of Pakistan denied the theft, the American administration waffled. Unconvinced, America's CIA and its military leaders placed their careers on the line to find the warheads before they reached their targets in the States. After a two year failed search spanning three continents, a successful nuclear attack on an American city by Islam's crusaders appeared imminent.

When the Americans executed Osama Bin Laden Al-Qaeda focused on a target, and, a leader for a leader became radical Islam's rallying call. Convinced by Eric and Admiral Michaels that he was the target, and that a weapon had arrived, President Gregory Paxton must choose. Would he seek his own safety, risk a major city and its entire population, or would he cave in and trade America's freedom by accepting Al-Qaeda's perverted terms for peace?

Media review copies can be obtained by making a request directly to the publisher: pressreleases@authorhouse.com

About the Author: Patrick
Patrick graduated from the University of Portland, in Portland, Oregon in 1965. His interest in writing grew from a diary he kept while on assignment to manage a construction project in Cairo Egypt. One year turned into seven as he traveled and worked throughout the Middle and Near East, and later to South Africa, Botswana, and Zimbabwe. Patrick’s international career ended at a remote border crossing in Botswana, Africa in 1991.

He returned to the Pacific Northwest where he lived until he retired from his construction business to devote his time to writing. Patrick has written six books; three fiction, and three nonfiction. He spent two years working on Egyptian military installations, on the back streets of Cairo, in the remote villages along the Nile, and in the Sinai Desert. Project Egypt, a Politically Incorrect View reflects his first attempt at assimilating into a world that, at the time, was beyond his understanding.

A tour on the Island of Cyprus resulted in his first fiction novel. The Terrorist legacy was a product of the people he met and the places he visited. A terrorist attack on the Island of Cyprus, which was divided down the middle by Muslim and Christian philosophy, drew Patrick into the world of Islam. Fear God and the Shadow of the Muslim Sword, and Islam’s Mandate, a Tribute to Jihad analyze the relationship between the world of Islam and the People of the Book, Jews, Christians, and Pagans.

9-11 brought Islam’s radical side to the forefront. Patrick revisited his tour in Pakistan and Afghanistan to write The Apostate Theory and his most recent work, Pakistan, America’s Armageddon.

Patrick lives in a coastal community of Florida. He has four children, seven grandchildren, one great grandchild, and his constant companion, Brandy, a Yellow Labrador who shares the space beneath his desk. 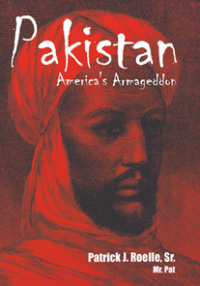