Free blog promotion, fresh content, coupons, and a free ebook are available to bloggers who join the Werewolves in the Renaissance Blog Tour. Organized by Tracy Falbe, the tour is seeking hosts to promote her new historical paranormal fantasy Werelord Thal.

Bloggers who join the blog tour that runs from February 11th to March 21st will benefit from free content for their blogs plus coupon discount codes to share with their readers for both ebook and paperback copies.

Additionally participating bloggers will gain extra promotional support from Falbe who will issue an online press release for every tour stop to drive traffic to each blog over the course of the tour.

The sign up form is located at the author’s blog Her Ladyship’s Quest that will serve as the organizing site for the tour. As blogs are added to the tour, they will be listed at the blog when the tour begins on February 11th.

The content of Falbe’s guest posts will focus on interesting snippets of historical information she gathered while researching Werelord Thal that is set in 1561 Bohemia. Falbe has long been fascinated by the period of the Renaissance and Reformation, a time of violent upheaval throughout Europe pushed by religious, political, and social changes that ushered in the modern era.

Blog tour hosts also may review Werelord Thal or interview the author instead of accepting a guest post. A free ebook copy of the novel will be provided to any blogger who requests one.

Werelord Thal: A Renaissance Werewolf Tale tells the story of Thal’s hunt for the killers of his mother. Before facing torture and execution as a witch, she cast the werewolf spell to summon Thal back from the forest where he had been living as a wolf after being transformed by his sorcerer father. 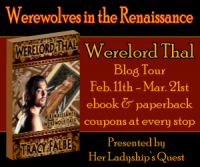 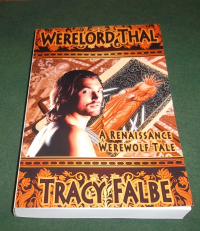