Fort Lauderdale, FL -- (SBWIRE) -- 04/07/2014 -- One of the most difficult tasks for managers is to be able to recognize and target passive aggressiveness, before it causes unneeded difficulties in project completion.

Managers know that teams will only perform and deliver as well as the person with less cooperative skills.

Even when not being able to use a name for the behavior, they can spot on destructive attitudes such as procrastination, “forgetting” to do something, chronic lateness, and intentional inefficiency, or sabotage.

This resentful attitude poisons team’s environment and reduces their dedication and enthusiasm to work. When it involves promising to do tasks others rely on — purposefully not getting them done and offering lame excuses later, while portraying this behavior as non-intentional – then the manager has a complex problem to solve. Time, energy, effort, opportunity and sometimes money, are lost.

Individuals using passive aggressive behavior promise compliance, but later deliver no measurable results. And this fake compliance or what has been called “intentional inefficiency” is more usual than expected.

“In cases where some work is actually done, it may be delivered too late to be useful e.g.: You needed this for the meeting at nine? I thought you said for the meeting at noon!, may be performed in a way that makes it useless e.g., You wanted the stats for ‘06? I thought you said the stats for ‘96!, or it may be sabotaged in a number of other ways.” explains the creator, Mr. Neil Warner

Having this challenge forces workers to be always on the lookout for “backstabbing behavior,” so they can defend themselves and preserve the quality of their own work.

Creative Conflict Resolutions has published a Kindle book about how to identify and face this challenge. Here the reader can find information about:

- How to develop their managerial skills in the face of this difficult behavior
- Learn why passive aggressive behavior exists and what likely leads to it
- Learn how to identify hidden work resentment and the passive aggressive attack
- Learn how to not to be controlled by pathological behaviors
- Reinforce their self-image as a resilient leader, able to confront sabotage
- Learn why conventional wisdom and the logical approach to dealing with Passive Aggression won’t work — it may actually make things worse
- Discover 6 guerrilla tactics to improve their work environment
- Create an action plan to handle individual passive aggressive worker s.

"Guerrilla Tactics Against Passive Aggression in the Work Place," provides everyone with knowledge and ideas to identify and manage passive aggressive workers.

The ebook includes detailed strategies and reference data, and it is ideal for leaders having to deal directly with passive aggression in the workplace. 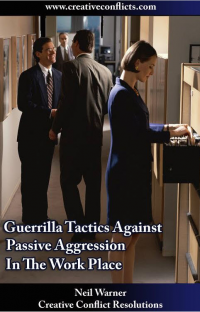