El Segundo, CA -- (SBWIRE) -- 01/06/2016 -- Working at a restaurant as a waiter, Roberto Loioco was asked to tell the chef that the pasta served that night was wonderful.

"It wasn't. It was more like cardboard than decent pasta. I grew up with an Italian grandmother and I knew what good pasta was supposed to be like," he said. "The next day I went and bought a pasta maker. I made some spinach and ricotta raviolis and gave some to my boss. He said it was exactly like his Italian grandmother used to make."

That was his first sale and his first customer. Mr. Loioco then started experimenting with pastas and the flours used to make them. Some were good, some were not so good. As he narrowed in on what made the best pasta, he also started wondering about gluten free.

"I know a lot of people who are trying to cut gluten from their diets. I also know people who genuinely can't have gluten because of medical issues. These people are missing some of the world's best food. That just cannot be allowed to continue," he said.

He began experiments with gluten free flours. He eventually settled on a proprietary blend of, rice, potato and tapioca flours. What sets his apart from all other gluten free pastas on the market today is the choice of various flours.

"It took two and a half years to develop the perfect recipe. The mix we provide now is both delicious and holds up to the various dishes pasta is used in," he said. "If you have ever had gluten free pasta, you probably noticed it does not have much taste. Mine does. It will hold up against any other pasta you want to compare it to."

The other problem with mixes that use quinoa, corn and other flours is they will not work in all recipes. The taste may be there, Mr. Loioco said, but their use is limited.

"Our flour can be used for lasagna, ravioli, gnocchi, cannelloni and even pizza crusts. A good pizza must have good flour," he said.

About Pasta Loioco
Robert Loioco developed a gluten-free pasta with a proprietary recipes that delivers the taste people expect from homemade pasta. Because it is gluten free, it's safe for people with gluten tolerance issues. The company also produces gluten free pizza dough. Pasta Loioco is based in El Segundo CA. 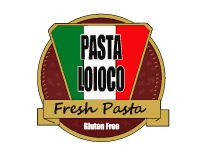