Pathfinder Films LTD. has set Oct. 25th 2013 for a limited release of the Vietnamese horror film “House in the Alley”.

Hollywood, CA -- (SBWIRE) -- 09/13/2013 -- “House in the Alley” stars Ngo Thanh Van and Tran Bao Sonas a young couple who were happily settling into their new life in their spacious home until they lose their baby to a miscarriage. After the tragedy, Thao is inconsolable and won’t let her baby’s body leave the house. Normal life eludes her as terrifying visions undermine her sanity. Her husband, Thanh, experiences strange phenomena around their home and when his wife turns on him, he must race to uncover the secrets of the house in the alley before they lose their sanity and their lives.

Ngo ThanhVan, is a familiar to Vietnamese audiences as both an actress and a singer. As an actress she has starred in Ringo Le’s Saigon Love Story and 2 in 1 by Dao DuyPhuc. She starred in Vietnam’s big 2007 box office hit, Charlie Nguyen’s The Rebel (Giong Mau Anh Hung), and was last seen in 2009’s wide-released Clash (Bay Rong). In both of these films she starred with action star Johnny Tri Nguyen.

The film was written and directed by Le-Van Kiet. He was born in Viet Nam and immigrated with his family to the United States when he was two years old. Kiet graduated from UCLA’s School of Film and Television where his short film “The Silence” was awarded the best student film in his class.

Says writer/director, Le-Van Kiet, “I am Vietnamese and American. For me eventually the film does speak about where I have come from. The family aspect of it and the mother and her incessant detail about making your life meaningful to whatever you are doing. A western viewer can understand it just as I can and a Vietnamese person sees it differently in a way that I also see.”

About Pathfinder Films
Pathfinder Films LTD. is a production, sales, and distribution company, creating and licensing quality independent films to sell on the domestic and international market.

Fueled with the capital, resources and contacts, Pathfinder’s consortium of filmmakers handle the development, production, post production / VFX, and global distribution of our own content which spans multiple genres. (Si-Fi, action, crime, comedy and suspense.)

We also license an expanding slate of outstanding independent films from other producers, representing them in house and at the major film markets to find a home for their film. 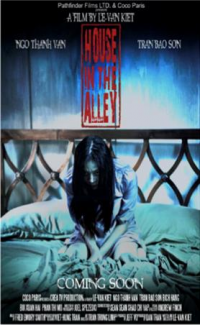