Santa Clarita, CA -- (SBWIRE) -- 10/17/2012 -- Success stories of women entrepreneurs are very rare in this male-dominated business world, but Ms. Patricia Gracia (Ms. Gracia) is one to remember and get noted. She is one of the rare jewels to which the community of USA salutes. Ms. Gracia has been awarded the prestigious XVII Tumi USA Excellence Award for the year 2012.

Ms. Gracia is one of the 13 outstanding individuals who were honored the Tumi USA Excellence Award 2012. These personalities have their roots in Peru and Latin America, and they are the people who displayed indomitable spirit, professional valor and proficient involvement in building the community of the United States.

In the presence of the president of the organization, Gloria Rosebrough, a sumptuous red carpet dinner was offered to the awardees at the DoubleTree Grand Hotel Biscayne Bay, Friday, September 28, 2012, followed by an award ceremony on Saturday, September 29, 2012 at the Teatro Arturo Artime in Miami, Fl.

Created in 1995 by Federico Perez-Eguren, Sergio Massa, Gloria Rosebrough and Nancy Bradley, the Tumi USA Awards shines the spotlight on Peruvian immigrants whose vast array of accomplishments and leadership exhibit a spirit of camaraderie, dedication to their life’s work, professionalism and community service.

The Tumi is the national symbol of Peru and according to historians it was a symbol for the power of life for ancient Peruvians and was used in ritual sacrifices. The Tumi USA award is the best manner in which to honor visionaries that constantly overcome challenges while demonstrating their solidarity to their fellow colleagues.

Ms. Gracia is the founder of Power Media Group, Inc. and Power Woman Business Center situated at Santa Clarita, CA.  She is a Peruvian immigrant, who came to the United States in 1987, crossing the Mexican border at the age of 18 to make it big in the United States.

She promptly mastered the lingua franca of the United States, the English language within no time and incorporated her own advertising agency, Power Media Group, Inc. (http://www.powermediagroup.com), alongside her husband and co-founder, Tony Gracia catering to the public relations industry.

Later, she established a nonprofit 501C3 organization, Power Woman Business Center (http://www.powerwomanbc.com), a business incubator for entrepreneurs.  She had a resolution to give back to the country what she got to realize her dream of making it big in the media business.

At the award function, Ms. Gracia was overwhelmed by the honor she was conferred upon. With the humble spirit of recognizing the Peruvian community, she said these few impressive words encouraging the Latino community, “When I received the phone call about the award, the first thought that crossed my mind was of my grandparents and how proud they would be. I take great pride in my roots and never take for granted what it took me to get to where I am now. Therefore, I dedicate this award to Peru."

About Power Media Group
Power Media Group (PMG) is a Hispanic Advertising Agency working with latino community in creating and implementing media campaigns to reach out to the expanding Hispanic population that contributes to almost US $1 trillion to the U.S. economy annually. PMG has many awards, certifications and accomplishments to its credit. For more information about the organization and its founder, visit http://www.powermediagroup.com now. 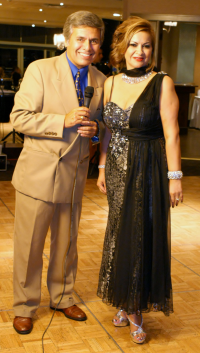