Santa Clarita, CA -- (SBWIRE) -- 08/01/2013 -- On July 25th, California State Senator Steve Knight announced Patsy Ayala as 'Woman of the Year 2013'. Senator Knight had the pleasure of presenting a senate resolution to Patsy Ayala at Santa Clarita City Hall followed by an intimate reception with her family and friends present.

Patsy has worked hard to gain respect and is now a very influential woman in the Santa Clarita area. Patsy is a firm believer on education as a tool for transforming lives; and as such, is a big supporter of educational initiatives, schooling from elementary through to university and Santa Clarita School Districts.

Over the course of her career thus far, Patsy Ayala has worked for major companies including Azteca Television, Mobil Oil and General Electric where she played an integral role in Human Resources. In addition to this, Patsy has an entrepreneurial spirit, which she has fuelled by opening a number of fitness franchises throughout Santa Clarita. She is also co-founder of the Ex-A-Tec California Alumni association, and CEO for her newest venture, Nuestros Valles/Our Valleys bilingual multimedia solutions and the first bilingual magazine, catering to the middle/high income bilingual and Hispanic residents within Santa Clarita and surrounding valleys. In just one year, the magazine has gone from strength to strength with astounding growth and restructuring in accordance with readers wishes, which has resulted in an outstanding magazine with large appeal both on and offline.

Patsy Ayala was quoted as saying: “Education transforms lives and it is through education that everyone can become globally competitive, which nowadays is essential for success. There are no boundaries to become successful and education, hard work, integrity and discipline can take you there”.

Patsy is a Member of the Board of Directors of the Santa Clarita Valley Latino Chamber of Commerce and is always involved and participating in many community events coordinated by SCVLCC, as well as the Antelope Valley Hispanic Chamber of Commerce. Patsy is married to Julio del Rio and has two sons Santiago and Rodrigo. This is not the first accolade Patsy has received as she was honored as Iconic Woman of the year 2012, awarded forty under 40 by the Junior Chamber International and has been speaker on multiple events, including Chancellor Circle at the College of The Canyons in Santa Clarita, CA.

Discussing Patsy Ayala and co-winner of the award, Patricia Gracia, Senator Knight stated: “Both of these highly motivated, highly determined women have been a huge asset to this community. They have shown a true commitment to building a strong and robust economy in the Santa Clarita Valley. I am grateful for their hard work both professionally and personally and I am happy to recognize them as the 21st Senate District’s Women of the Year.” 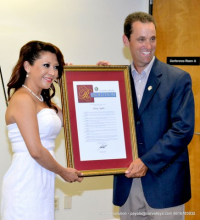