In one of the wettest states in the US, Penhall Technologies (https://www.penhall.com/utility-locating/) Ground Penetrating Radar Analyst, Mariah Ottersen anxiously checked the 7-day forecast looking for a 3-day window of clear skies in Auburn, Washington for a new project. Penhall Technologies typically specializes in concrete scanning and utility locating using ground penetrating radar (GPR) to locate rebar, post tension cables, conduit, and utility lines in both concrete and soils. Recently, the team got to put their GPR equipment and analyst expertise to the test on a new project - cemetery mapping and exploration services.

Patricia Cosgrove of the White River Valley Museum (http://www.wrvmuseum.org) contacted Penhall Technologies in hopes we could perform a survey to help locate existing gravesites at the 156 year old Japanese-American/Buddhist Cemetery. The museum's goal was to both accurately record the number of existing interments without corresponding headstones and to identify vacant areas of the cemetery to allow for future burials of families.

Weather and soil conditions can dictate the success of a GPR survey. Dry sandy soils with little salt content yield excellent results with GPR. Heavy, wet soils make it more difficult to get clear GPR readings when collecting the data. In a state like Washington, where rainfall is high, much of the soil is heavy and wet. Eight days after the originally scheduled start date, the clouds cleared and there was sunshine in the Northwest. Ottersen arrived at the cemetery to execute phase 1 of 2 of the cemetery mapping project. 4Culture (http://www.4culture.org/), the cultural services agency for King County, funded the 3 day project through a grant from King County Appropriation. What was originally expected to be a 3-day project only took two.

Day one was spent at the Auburn Cemetery collecting data. Data for these types of projects must be collected in a carefully planned manner. Each pass with the GPR equipment must be linear and equal length. "The hope was to be able to determine the difference between the 130 year old burials and soil disturbances, and the buried glacial/river erratic and root systems from the large vegetation onsite." explained Ottersen. According to GSSI (http://www.geophysical.com/gssifaqs.htm), while GPR can sometimes detect the presence of a body, it more often identifies disturbances in the soil such as those created when a grave is dug and refilled. It was the identification of soil disturbances that led Ottersen to map where there were bodies and where there were none.

Day two was spent analyzing each file of collected data using GSSI Radan software and creating the final maps and reports for the museum.

Upon completion of the data processing, Ottersen shared her results. She was able to successfully map locations of existing graves and identified potential areas for future burials, even though decomposition and shifting during flooding events can skew data that is collected. "Understanding that this cemetery was also part of the flood plain for many years can raise the question of the likelihood of any of the remains being left behind in their original state due to decomposition of the wooden caskets." Ottersen concluded.

The Auburn Cemetery can now confidently share with members of buried loved ones where vacant land is available for future generations. Penhall Technologies is thrilled to have had the opportunity to be a part of such a historical landmark and the plans for future use.

To find out more about scheduling your project with Penhall Technologies, visit: https://www.penhall.com/utility-locating/

To learn more about 4Culture and the cause they stand for: http://www.4culture.org/

To discover more about GSSI and other GPR facts: http://www.geophysical.com/ 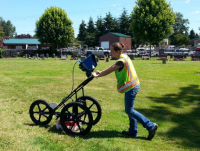