New study demonstrates the arts support the economy in Pennsylvania.

Harrisburg, PA -- (SBWIRE) -- 06/11/2012 -- The nonprofit arts and culture industry generates $2.55 billion in annual economic activity in Pennsylvania – supporting over 81,000 full-time equivalent jobs and generating $360 million in state and local government revenues, according to the Arts & Economic Prosperity IV national economic impact study. The most comprehensive economic impact study of the nonprofit arts and culture industry ever conducted in the United States, Arts & Economic Prosperity IV was conducted by Americans for the Arts, the nation’s leading nonprofit organization for advancing the arts and arts education.

According to the study, nonprofit arts and culture organizations spent $1.47 billion during fiscal year 2012. This spending is far reaching: organizations pay employees, purchase supplies, contract for services and acquire assets within their community. Those dollars, in turn, generated $1.25 billion in household income for local residents and approximately $142 million in state and local government revenues.

“This study demonstrates nonprofit arts are part of the business sector,” says Jenny L. Hershour, managing director of Citizens for the Arts in Pennsylvania. “This industry creates jobs and generates government revenue, which is what Pennsylvania’s economy needs.”

In addition to spending by organizations, the nonprofit arts and culture industry in Pennsylvania leverages over $1 billion in event-relating spending by its audiences. As a result of attending a cultural event, attendees often eat dinner in local restaurants, pay for parking, buy gifts and souvenirs, and pay a babysitter. What’s more, attendees from out of town often stay in a local hotel. In Pennsylvania, these dollars support 30,236 full-time equivalent jobs and generate $198.4 million in state and local government revenues.

Citizens for the Arts in Pennsylvania (CFA/PA) is a nonprofit 501 (c)(3) organization committed to creating a strong and supportive environment for the arts in Pennsylvania. CFA/PA speaks out for the interests of artists and arts organizations across the state. As Pennsylvania’s only statewide multidisciplinary arts advocacy organization, CFA/PA works to publicize the contributions of the arts to society, increase public and private investment in the arts, expand the role of the arts in tourism, and promote the positive impact of arts education. For additional information, go to www.citizensfortheartsinpa.org or e-mail Jenny Hershour, managing director, at jlh@citizensfortheartsinpa.org. 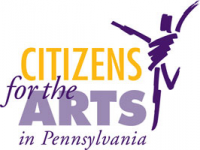