Philadelphia, PA -- (SBWIRE) -- 12/13/2011 -- Australian based development studio Pixel Hauz has recently released Little Pocket Friends Touch and Learn, their second in what aims to be a line of iPod Touch apps for kids ages one to five. Little Pocket Friends is a digital flashcard system that helps early learners hear, see and ultimately memorize words representing objects in their everyday world. It’s all built around fun, colorful images that interact with children through sound and movement as the child touches the screen.

“You don’t always have to pull out a big, clunky toy to capture a little one’s attention,” said Soon Ooi, the lead developer at Pixel Hauz. “With your portable Apple device, and the right app, you can have hours of fun time with your child. I’ve strived to make Little Pocket Friends Touch and Learn that type of iPad app for children.”

Little Pocket Friends includes nine categories with a total of 150 words. By touching the screen children can learn about animals, colors, things in nature, shapes, feelings, vehicles, activities, numbers and everyday items like a spoon, blanket, phone and chair. When they want to change the image, they simply click the “X” on the screen. It’s one of those iPod Touch apps for kids that teaches words they’ll be using on a regular basis, as well as the practicalities of opening and closing apps.

“Parents can either go through each image showing the words or they can individually spell the words out,” added Ooi. “This is truly an iPad app that does a great job both with and without parental interaction.”

Little Pocket Friends is available for both iPad and iPod devices through Apple’s iTune store for $1.99. It can purchased and downloaded from (http://itunes.apple.com/us/app/little-pocket-friends-touch/id483127768?ls=1&mt=8).

About Pixel Hauz
Pixel Hauz is a development studio that specializes in innovative and interactive educational Apple-based apps for young minds. Their apps help early learners master the world around them with fun games that feature bright colors, sounds and kid-friendly language. Besides Little Pocket Friends Touch and Learn, they’re also the makers of Learn ABC; It’s Munch Time, which is available on iTunes for $1.99. 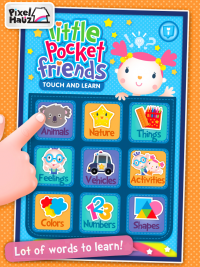