Masterfully crafted by Karen M. Curry, ‘PK: The Laver Experience’ takes Christian fiction to an edgy new level, by replacing convention with issues and dilemmas that plague modern society. When a summer beach retreat is organized for ‘Preacher Kids’, the lives of six young people overlap in a way that will shock yet provoke vital thought into even the most liberal of Christians. With God showing up for a cameo appearance, Curry has hit on the perfect up-to-the-minute formula for showcasing the Lord’s unwavering love for broken people.

Mims, FL -- (SBWIRE) -- 07/09/2014 -- While Christian Fiction has seen an undeniable boom in recent years, both readers and critics are crying out for wholly-unique new narratives that don’t succumb to the recycling of the ‘same old’ stuffy concepts. Thankfully, Karen M. Curry is answering the call with gusto, and her new novel isn’t afraid to push the boundaries of Christian convention to ruffle more than a few feathers.

‘PK: The Laver Experience’ is unlike any other Christian fiction novel before it. Aware of the bland and vanilla narratives that have become commonplace in the genre, Curry stirs both the pot and the imagination as issues of sex, racism and drugs collide.

Unity Broadcasting Network (UBN), the largest Christian television station in the country, reaches every corner of the globe with the gospel of Jesus Christ. But founders Mark and Cheryl Houston have recently realized that in their mission to reach souls on every continent, they may have overlooked the teenager in their own household. Finding this to be a trend among ministry families, the Houstons approve a plan submitted by Dr. Brandon Hutchinson, resident Psychologist and Youth Minister to bring Preacher’s Kids (PKs) from all across the country together to minister to their unique needs.

Before they can bring in hundreds PKs for a retreat, they must organize, plan and train staff. So six delegates - all young adult PKs and all ministers in their own right - are recruited from hundreds of applicants to be trained, to offer advice and to be prepared to minister as next year’s retreat staff – Official UBN Youth Ministers.

But not even twenty years of youth ministry could have prepared Dr. Brandon for the roller coaster ride that is to happen over the summer as six young people’s lives overlap and collide on their way to the brazen laver - where Priests are prepared to serve.

“Christian novels always have the same theme; a one-dimensional heroine and archetypal villain; all concluding in the heroine marrying a man who appeared in the nick of time to save the day,” admits Curry, herself a preacher kid. “I’m pushing the genre forward by instead depicting and debating real issues that affect society. The church cannot continue to be afraid to address the issues and epidemics that surround us.”

Continuing, “Readers will get to explore and discuss homosexuality, drugs and more from a Christian perspective; presented a real-life fashion that most shy away from. Through the authenticity of the characters and careful blend of fiction and Christianity, readers will have a platform to discuss these pertinent issues from the perspective of 21st-Century America.”

While edgy, the book also contains beautiful moments of epiphany. “The gospel is embedded in the plot and shines through at unexpected moments. My ultimate goal is to present a fresh visual on God's passionate love for and never ending pursuit of imperfect, broken people,” Curry adds.

To date, the novel has garnered rave reviews. Mike Bolger comments, “I really liked this book. It is a page turner with lots of interesting characters and plot twists. Would definitely recommend it for anyone looking for a fun read that will also challenge you to think about yourself. And who knew that PK's could get into so much trouble!”

Kim B. was equally as impressed, adding, “This was such a compelling story that I was drawn in from page 1 and could not put the book down. Karen Curry did such a great job bringing each of the characters, their distinct personalities and backgrounds to life. I felt like I got to know each one of them as they struggled to overcome their pasts, learn who they really were, and become who they were meant to be – some more successful than others. I felt joy, I cried, and I learned some things about myself too as I read this book”

About Karen M. Curry
Karen M. Curry was raised as a PK (preacher’s kid) in Mims, Florida. In 1993, Curry earned a B.S. in Economics and a minor degree in Theatre from Florida A & M University. After graduation Curry produced a recital entitled ‘A Bride's Ransom’ in Orlando in 1994 and a musical, ‘The Perfect Present’ in 1997. In 2003 the decision was made to focus full-time on Curry’s newly started non-profit called The 911 Project. Under Ms. Curry’s leadership the project produced a 30 minute TV show using youth from the local inner city community. The show entitled “Get Real!” was written and directed by Ms. Curry and aired on local access channel in Sarasota, FL. In October 2004, Ms. Curry published her first book entitled “Dancing in the Spirit”. Karen Curry is also the mother of two beautiful children, Loren Todd and Simone Alicia who are both full-time college students. Curry is a member of Fire & Hammer International Ministries in Tallahassee where she is an ordained Elder. 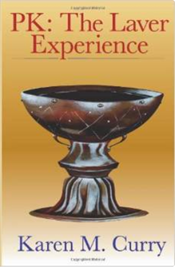