The paper highlights recently announced scientific results and is written by the research team at the Biotechnology and Radiobiology Laboratory at the Sharett Institute of Oncology at Hadassah Medical Center in Jerusalem.

Edwards, CO -- (SBWIRE) -- 06/24/2013 -- Scientists are taking a modern day approach at Acute Radiation Syndrome (ARS), an acute illness caused by the irradiation of the entire body (or most of the body) by a high dose of penetrating radiation in a very short period of time (usually a matter of minutes). Could placental cell therapy help mitigate the harmful effects sustained from acute radiation injury? That answer may be provided within a newly-published paper in the peer reviewed journal, PLOS ONE. The paper highlights recently announced scientific results and is written by the research team at the Biotechnology and Radiobiology Laboratory at the Sharett Institute of Oncology at Hadassah Medical Center in Jerusalem.

A study titled “Mitigation of lethal radiation syndrome in mice by intramuscular injection of 3D cultured adherent human placental stromal cells” is now published (June 18th) in the open access journal PLOS ONE (http://www.plosone.org/article/info%3Adoi%2F10.1371%2Fjournal.pone.0066549). This animal study of ARS was performed by Professor Raphael Gorodetsky and his team at the Biotechnology and Radiobiology Laboratory at the Sharett Institute of Oncology at Hadassah Medical Center, Jerusalem in collaboration with and the support of Pluristem Therapeutics, a leading developer of placenta-based cell therapies.

The findings of the published study suggest that the intramuscular treatment with Pluristem’s PLX-RAD cells may serve as a highly effective “off the shelf” therapy to mitigate ARS.

As previously announced by Pluristem and highlighted in the PLOS ONE paper, the treatment of intramuscular injection of PLX-RAD cells increased the survival of 7.7Gy irradiated mice from about 27% to about 98% (P<0.0001). The treated mice regained their weight significantly faster than the few control survivors. The treatment stimulated extensive hematopoietic stem cells (HSC) proliferation to enable the speedy recovery of the radiation induced depleted bone marrow with a parallel increase in the number of circulating white blood cells, red blood cells and platelets. The number of CD45+/SCA1+ hematopoietic progenitor cells within the fast recovering population of nucleated bone marrow cells in the irradiated mice was also elevated in the mice treated with PLX-RAD cells.

About Pluristem Therapeutics
Pluristem Therapeutics Inc. is a leading developer of placenta-based cell therapies. The Company's patented PLX (PLacental eXpanded) cells are a drug delivery platform that releases a cocktail of therapeutic proteins in response to a host of local and systemic inflammatory and ischemic diseases. PLX cells are grown using the company's proprietary 3D micro-environmental technology and are an "off-the-shelf" product that requires no tissue matching prior to administration.

Pluristem has a strong intellectual property position, company-owned GMP certified manufacturing and research facilities, strategic relationships with major research institutions and a seasoned management team. For more information visit www.pluristem.com, the content of which is not part of this press release.

About Hadassah University Medical Center
Hadassah is a state-of-the-art medical center incorporating all medical and surgical sub-specialties, with a tertiary care referral hospital at Ein Kerem and a community hospital on Mt. Scopus; Hadassah Hospitals have 850 physicians and Academic University Affiliated researchers, 1,940 nurses, 1,020 paramedical and support staff,1,200 support stuff, 1,200 beds, 31 operating theaters, 9 intensive care units and over 120 outpatient clinics treating over 1 million people a year from all over Israel and from neighboring countries. Hadassah’s Hospitals conduct more than half the medical research in Israel. The flagship of Hadassah, the Women's Zionist Organization of America, is the main supporter of the Hadassah Medical Center. 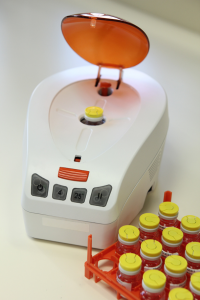