Ft Myers, FL -- (SBWIRE) -- 03/22/2013 -- Political thrillers grab readers by the frustrations and give their minds a good shake. In a time when little gets done in real world politics, and the excuses and accusations are lame, the political thriller novel fulfills a need to see change happen fast, concluding with sweeping drama. This week Itoh Press will release the paperback edition of "Jack Canon's American Destiny", a political thriller which has gained a word-of-mouth following in its current ebook format.

Author Greg Sandora wrote "Jack Canon's American Destiny" as a first person narrative from the point of view of a liberal politician, Jack Canon, running effectively for President Of The United States, when no one in corporate or political power wants him to succeed. A flawed character himself, Jack Canon must face down character assassination plots and murder attempts, on himself and those close to him, all in an effort to move him off political center stage.

Sandora brings the reader intimately inside the head of Jack Canon, a true-believer, a man in love with two women, charismatic, somewhere between Jack Kennedy and Hemingway, with a passion for his friends and his beliefs. The novel is unlike many political thrillers, though as suspenseful on the intrigue as the best political novels, this isn't just a political thriller, but a character study, and a study of love and friendship among truly human characters.

About Greg Sandora
Greg Sandora, author of "Jack Canon's American Destiny", grew up with parents who followed their passions and has spent his life doing the same. After owning an award winning fitness center in his hometown of Portland, Maine, Sandora moved to Ft Myers, Florida where he currently writes and works as a professional manager. 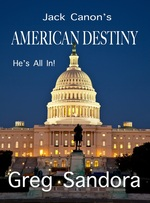