Surprisingly, within just 32-1/2 hours, the project was 100 percent funded by the popular crowd-sourcing website that continues to redefine how creative projects get launched into the world.

Bloom makes bright and catchy music that somehow makes their fans dig deep while their heart smiles. And now, thanks to the success of the Kickstarter campaign, they’re creating highly anticipated new music.

“The response to the Kickstarter project was overwhelming!” said the pop music band’s founder, Joshua Voiles. “We knew we had fans – but with this sort of support it really threw us into ‘scramble mode’ to come-up with stretch goals that allow us to expand on our vision of increasing world awesome – including going on our first world tour!”

This isn’t the first time Bloom has experienced such surprising support. In 2010, when they launched their debut album, Photosynthesis, they were shocked when hundreds of copies of the album were sold within just a few days – with zero support from any record labels and with no advertising whatsoever.

In addition to this flurry of album sales, they were offered to get their song, “Fight For Greatness” featured in the wildly popular video game franchise, Rock Band, as one of the very first rock music songs on the Rock Band 3 video game network to feature PRO keys.

As Bloom launched more music and videos into the world, Joshua said they started getting attention from mini and mega-celebrities alike. Joshua, who is the band’s guitarist, got one of his videos watched, shared, and commented on by the top-grossing actor, Tom Hanks (“Forrest Gump”, “Saving Private Ryan”), as well as Jim Sturgess (“21”, “Cloud Atlas”).

The drummer, Mari Voiles, got one of her videos shared by the world-renowned keyboardist for Dream Theater, Jordan Rudess – and yet another video shared by best-selling author, Brad Blanton.

Bloom has also had music videos shared by the musician and YouTube celebrity Alex Day, Joshua said, and the online video entrepreneur Hank Green. All of this attention has resulted in Bloom beginning to achieve that which they initially set out to do – make this world brighter and better.

“We have all gotten countless messages and letters from fans expressing the deep impact Bloom has made in their lives” mentioned Jeremy Finlay, singer and pianist for the group. “In fact, in several cases, the fans have claimed that Bloom had quite literally saved their lives – relieving them from the tempting grasp of suicide” added bassist Wally Allred.

“That’s really why we do what we do. We seek to create music that truly moves people, and inspires them to learn, grow, and to be their very best selves. It’s a lofty, if not romantic endeavor, but it’s what keeps us up at night and keeps us working hard in a dying industry that doesn’t readily reward substance and heart,” Mari said.

Anybody who would like to check out Bloom’s Kickstarter crowd funding project to get their new album early and at a fraction of the cost is welcome to visit http://www.KickstartBloom.com

About Bloom
BLOOM is a new breed of pop that is all about increasing world-awesome and decreasing world-suck. For more information, please visit http://www.kickstarter.com/projects/joshuavoiles/bloom-a-rush-of-rainbows-through-your-ear-holes 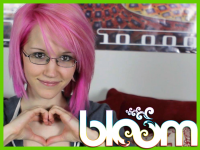