'Popemobile' Given New Lease on Life by GoldenPalace.Com

In wake of Pope’s resignation, ‘PopeMobile’ from record-breaking auction goes back on the block for charity.

Banbury, UK -- (SBWIRE) -- 02/27/2013 -- The car that drew international attention and broke eBay records with over 10 million visitors to its auction page in May 2005, is going back on the auction block courtesy of GoldenPalace.com, the current owners of the famous collectible.

In what was easily one of the most phenomenal events in Internet history, the car which once belonged to Cardinal Josef Ratzinger, now Pope Benedict XVI, was won by online casino GoldenPalace.com for an impressive €188,938.88.

Citing health concerns, the Pope announced that he would be resigning the papacy on February 28th, 2013. “When we learned of the Pope’s resignation we wanted to pay tribute by giving others the opportunity to own a piece of history” said Richard Allen, a spokesperson for GoldenPalace.com. Allen went on to say that “we believe that His Holiness would be especially pleased to know that the money raised as a result of this auction would be used to help the needy.”

GoldenPalace.com is excited to re-list this iconic piece of history, in what surely will be another spectacular event. The auction begins on Tuesday March 20th, 17:00 GMT, with a starting bid of only £0.99. To view auction, visit: http://www.ebay.co.uk/itm/Pope-Benedict-XVI-Volkswagen-Golf-/321076800159.

Proceeds from this auction will benefit Habitat for Humanity Great Britain, building hope all over the world. For more information, visit: http://www.habitatforhumanity.org.uk. 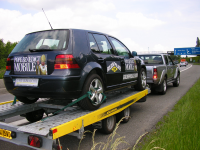