Minden, NV -- (SBWIRE) -- 07/14/2016 -- EverKid, which operates out of Minden, NV, has announced that their popular Halloween decoration set has been updated to include better packaging, making it a very popular gift for Halloween 2016. The company points out that Halloween is a wonderful festival in which the harvest is traditionally celebrated. It is seen as the night during which the real world and the spirit would blend, for a few hours only. But it is also a holiday for celebration, and gift giving is a natural part of it.

"We are starting to see people give Halloween gifts to others," says Elena Vera from EverKid. "They may, for instance, do this as a thank you for an invitation for a Halloween party, or simply because they want to spread some Halloween joy in their community. We are proud to announce that our Halloween lanterns have now been updated so that they are more suitable for gift giving."

The product, as can be seen on the company's website at http://everkid.biz, includes two white lanterns with black spider webs, one orange Jack-O lantern, one blue lantern with dark blue bats, and one black lantern with a white skeleton. It now also includes an orange fan with a black witch printed on it, which is another update to the product. Now, rather than being placed in a nondescript box, it is now available in Halloween-themed packaging, in a square shape. This makes it much easier for gift wrapping.

"We've heard that our customers like the fact that the box is shaped perfectly to be wrapped," adds Elena Vera. "Not just that but the box itself is now also Halloween themed, which just gives the whole thing a more celebratory feel. We're happy to have received so many positive comments about our product."

The Halloween decoration product can be ordered through the company's Amazon store. Many positive reviews have already been left about the product, and it is quickly becoming one of the popular Halloween decorations this year. With the new packaging and added orange fan, it is becoming even more popular.

About EverKid
EverKid is a small family owned company that with passion and creativity develops unique gifts for kids of any age. 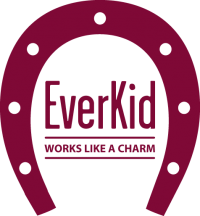