NuLEDs is inviting all to play a part in creating the world’s first intelligent RGBW light powered by power-over-Ethernet switch ports. The overall funding requirement for this project is $198,000.

Carlsbad, CA -- (SBWIRE) -- 10/22/2014 -- LED technology has seen commendable improvements in the recent years and NuLEDs has been a dedicated player in this progress. With their pioneering work in the field of lighting-over-IP, they are all set to revolutionize the future of Intelligent Lighting. E-Lite is the latest venture from the company that promises to be the first ever recessed RGBW can light in the world, capable of drawing power directly from a Power-over-Ethernet switch. Users will be able to create more than one billion colors and dim levels, with the RGBW (red, green, blue, white) LED light source.

Power-over-Ethernet is an emerging technology that delivers power and communication from each port and provides the platform for intelligent lighting. When completed, this project will fulfill the company’s vision of creating a lighting environment where there is integration between the lighting and its surroundings, users, and other applications within the same network. Just by downloading an app and plugging into a PoE switch, users will be able to control their can lights using their tablets or Smartphones.

NuLEDs has already made noteworthy progress towards the development of E-Lite. The prototyping and testing of all aspects of the product have been completed already. However, there is still a lot to be done, and that is where Kickstarter backers can make a significant impact. This includes

- Design optimization for manufacturability.
- Creation of the tooling.
- Optimization of the electronics.
- Designing the packaging.
- Writing the app.
- More testing.

To complete this project successfully, NuLEDs needs to raise at least $198,000 is by Tuesday, November 18th.

More details about the campaign can be found at http://kck.st/ZLz7DQ

About NuLEDs
NuLEDs is an organically grown company, and has developed the most advanced control system for controlling lights that are Ethernet powered. The company has been honing their patented NuSPICE protocol for years. NuLEDs’ Lighting-over-IP systems can be found in data centers and schools, as well as several campus buildings at Cisco. 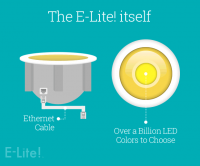