Tempe, Az -- (SBWIRE) -- 05/16/2012 -- Last month, press release distribution experts pressreleasemonkey.com announced a contest to name their brand new mascot. The objective of the contest was to come up with a name that reflected online related media as well as the monkey’s enthusiasm for spreading the news.

The contest drew a sizable response for their fans with names that ranged all across the board. Names such as Presston, PR Diddy and Rudy were all entered, but in the end the name “Scoop” was selected and the permanent namesake for their new spokesman.

Mark Bauer, who manages the writing and distribution departments at Press Release Monkey, comments: “We felt scoop was the ideal name for our new mascot. It reflected the news perfectly, as in ‘what’s the scoop,’ and it had the subtlety we were looking for for our somewhat cute, somewhat impassioned monkey. The second we read it we were like ‘Yup, that’s the one.’”

The winner will be awarded with a free Gold Plus press release which includes writing plus mass distribution- This is usually a $150 service. His press release will be written by one of Press Release Monkey’s expert writers and will be sent over both of their top tier syndication networks.

“We’re pleased that the winner came up with the name that we couldn’t quite come up with ourselves,” says Tyson Crisp who manages the sales department at PRM. “We have a really good feeling about Scoop and his role as the permanent mascot for our continually evolving service.”

About Press Release Monkey
Started in 1996, Press Release Monkey has earned a reputation for providing syndication which rivals “popular” PR sites that charge up to 4 times as much for nearly identical services. They boast a huge list of media contacts and industry connections, and they maintain a sizable network of news websites that supplement their 3rd party syndication. 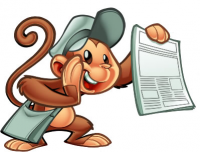