Los Angeles, CA -- (SBWIRE) -- 08/21/2012 -- PressReleaseMonkey.com announced today that they sold their 10,000th press release and are celebrating the achievement by offering $50 off their most sought after writing plus distribution packages.

In today’s ever changing online landscape, press release marketing remains one of the central facets to building a strong presence online. Successful Internet Marketers know how important press releases are to their campaigns, but many shutter at the idea of writing their own content, or don’t know where to look for syndication that actually turns a profit on their investment.

With many press release companies vying for sales, the idea of a full service press release firm was not entirely novel to the industry, but it’s what PRM did with the model that really skyrocketed their business into the 10,000th sale.

“Our goal has always been to provide a completely ‘hands off’ service whose quality spoke to the integrity of our client’s websites,” says Mark Bauer, cofounder of PRM. “We wanted to provide exceptionally high quality press releases that landed on high page rank websites- For lack of a better way to put it, we wanted to be the best of the best. We always keep our goals out in front of us, but I think it’s a testament to our service that we have sold so many of these packages.”

Press Release Monkey has also recently partnered with PRWeb, one of the biggest names in the press release industry. After negotiating aggressive pricing they are now offering their “Platinum” package which has all the syndication of PRMs famous “Gold Plus” package, but with an added 250,000 news subscribers, niche-based media outlets, city specific targeting, as well as PRWeb’s exclusive syndication.

“In our office we jokingly call the Platinum package the ‘Lamborghini’ of press release marketing,” says Mark Bauer. “We’ve done extensive research and it really doesn’t get stronger than this. We’re seeing companies charge upwards of $500 for equal syndication without the writing.”

The $50 off coupon code is being offered for a limited time and will be taken down after the 50th sale. It will work for both the Gold Plus and the Platinum packages, both which include writing plus mass syndication. The coupon code is “TenThousand.”

To set up an account and get started, please visit: http://www.pressreleasemonkey.com/support

About Press Release Monkey
Press Release Monkey (PRM) is a full service press release company that specializes in writing plus mass distribution. They employ a full team of professional writers and aim to provide a 100% “hands off” experience for their clientele. Their service has exploded over the last two years and they have grown to become one of the most respected names in the press release industry. They recently sold their 10,000th press release. 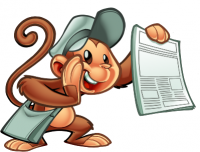