Amsterdam, Netherlands -- (SBWIRE) -- 10/07/2014 -- Manny Steinberg spent his teens in Nazi extermination camps in Germany and Poland, miraculously surviving while millions perished. His gripping story was published as a Kindle book on 23 September 2014.

Outcry – Holocaust Memoirs is the candid and moving account of a teenager who survived four Nazi camps: Dachau, Auschwitz, Vaihingen and Neckagerach. While being subjected to torture and degradation, he agonized over two haunting questions: "Why the Jews?" and "How can the world let this happen?"

When the Americans arrived in April 1945, Manny Steinberg was little more than a living skeleton, with several broken ribs and suffering from a serious lung condition, wearing only a dirty, ragged blanket. Cherishing a picture of his beloved mother in his wooden shoe, he miraculously survived the terror of the Polish and German concentration camps together with his father and brother.

This autobiography was written to fulfill a promise the author made to himself during the first days of freedom. The story is told through the eyes of an old man forcing himself to relive years of intense suffering, and touches the reader with its directness and simplicity. It is an account of human cruelty, but also a testimony to the power of love and hope.

By publishing his Holocaust memoirs, the author wants to ensure that the world never forgets what happened during WWII. 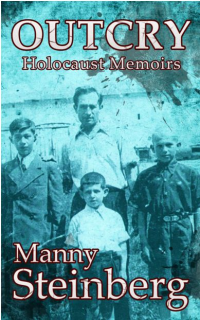