Until recently, LTE has predominantly been considered a supplementary mobile broadband technology in the public safety sector, to provide high-bandwidth data applications that cannot be delivered over existing narrowband LMR (Land Mobile Radio) systems. However, with the standardization of capabilities such as MCPTT (Mission-Critical PTT) by the 3GPP, LTE is increasingly being viewed as an all-inclusive critical communications platform for the delivery of multiple mission-critical services ranging from PTT group communications to real-time video surveillance.

A number of dedicated public safety LTE networks are already operational across the globe, ranging from nationwide systems in the oil-rich GCC (Gulf Cooperation Council) region to citywide networks in Spain, China, Pakistan, Laos and Kenya. Among other notable engagements, several "early builder" networks are operational in the United States - that will subsequently merge with the wider FirstNet nationwide system; early pilot LTE networks for the Sate-Net program are in the process of being commercialized in South Korea; and Canada is beginning to see its first dedicated LTE network deployments, starting with the Halton Regional Police Service.

However, the use of LTE in the public safety sector is not restricted to dedicated networks alone. For example, the United Kingdom Home Office is in the process of deploying an ESN (Emergency Services Network) that will use British mobile operator EE's commercial LTE RAN and a dedicated mobile core to eventually replace the country's existing nationwide TETRA system. The secure MVNO (Mobile Virtual Network Operator) model is already being used in multiple European countries, albeit at a smaller scale - to complement existing TETRA networks with broadband capabilities. In addition, this approach also beginning to gain traction in other parts of the world, such as Mexico.

Driven by demand for both dedicated and secure MVNO networks, Publisher estimates that annual investments in public safety LTE infrastructure will surpass $800 Million by the end of 2017, supporting ongoing deployments in multiple frequency bands across the 400/450 MHz, 700 MHz, 800 MHz, and higher frequency ranges. The market - which includes base stations (eNBs), mobile core and transport network equipment - is further expected to grow at a CAGR of nearly 45% over the next three years. By 2020, these infrastructure investments will be complemented by up to 3.8 Million LTE device shipments, ranging from smartphones and ruggedized handheld terminals to vehicular routers and IoT modules.

For more information Visit at: https://www.marketresearchreports.com/signals-and-systems-telecom/public-safety-lte-mobile-broadband-market-2017-2030-opportunities

Find all Telecom Reports at: https://www.marketresearchreports.com/telecom 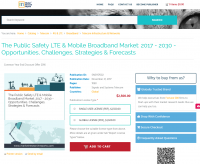