Publishing Unleashed Is Proud to Announce the Launch of an Exciting New Book, The Outside the Box Executive by Richard (Dick) Lindenmuth Available Now

Raleigh, NC -- (SBWIRE) -- 01/17/2014 -- The Interim Executive field, while a fairly new concept, is rapidly expanding. The movement started in the United Kingdom due to stringent labor laws and expanded to France, Germany and the Middle East. Interim Executives are often used in government positions and in the financial industry. It is an "outside the box" approach for such organizations to hire interim CEOs, and the benefit of having an outside look and a strategy specialist is being recognized as a great value.

Lindenmuth recognized the demand for Interim Executives and set out to make his book an all-in-one guide for anyone interested in becoming an Interim Executive or just a more effective leader. Lindenmuth has had great success both in America and internationally as an Interim Executive with a proven track record of growing company revenues as much as 25-30 percent and improving organizations' performance.

"Richard Lindenmuth has done a masterful job capturing and describing the world of the Interim Executive. He shares insights One can only learn from years of experience in leadership and particularly in interim engagements worldwide."
~Robert Jordan, Founder of the Association for Interim Executives.

"An outstanding primer for any executive fireman. A must-read!"
~David Heenan, author, Leaving on Top: Graceful Exits for Leaders

In this book, he identifies the key skills and a way of thinking about problems that are a must for a successful Interim Executive. Whether They are an existing executive or an aspiring leader, this all-in-one guide will serve as a vital tool for their path to success.

Buy The Outside the Box Executive now on Amazon

With more than 30 years of management experience in domestic and international operations, Richard (Dick) Lindenmuth is noted for his execution skills in both high-growth and distressed environments. As President of ITT's Business and Consumer Communications Group, he led 12,000 employees through rapid deregulation and grew the revenues fourfold to profitability in record time. With the exception of Antarctica, Richard has visited virtually every place around the globe where he became fluent in Italian and French. Richard is also a US Navy Veteran, an athlete, and a black belt in multiple martial arts styles.

For more information about Richard Lindenmuth, his book The Outside the Box Executive, or promotional speaking opportunities, contact Tanya Stockton at Tanya@PublishingUnleashed.com.

About Publishing Unleashed
"Publishing Unleashed is a unique business model that makes sense and is embraced by authors and entrepreneurs alike. The model, one of empowerment, supports authors in allowing them to maintain their intellectual property and creative control in addition to working with a publishing partner and a team of experts. Traditional book promotions strategies are combined with cutting edge technologies and social media connections for maximum monetization and distribution of content." 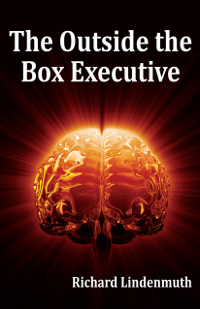