Told as a factual history of America and baseball, leading up to 1904, ‘Pure Baseball’ examines the challenges, successes and defeats of one mythical slugger. Interwoven with commentary about what is truly important in life, the book is scoring home runs with readers around the world.

Kerrobert, SK -- (SBWIRE) -- 04/29/2013 -- While it may just be a sport, baseball is so deeply interwoven with American culture that its own story is a microcosm of American history. Sharing many of the same struggles and triumphs as the country it’s cherished by, Baseball holds many clues and reminders to America’s past.

In his compelling new book, ‘Pure Baseball: The Carl Jaxsom Legend’, Ryan Thaddeus tells the story of one fictional slugger while simultaneously giving a vivid insight into pre-1904 America.

At the dawn of the twentieth century, baseball has caught on like wildfire in the big cities. As 1904 is to mark the second year of the modern-day World Series, one of the most heated rivalries in sports history begins to emerge. In order to defend their title, Boston needs to get past their future nemesis from New York. But as the season winds down to its final series, a myth is growing out of the very fibers of the American fabric itself.

Fantastical rumors have been romanticizing an unknown hitter who is said to be batting 1.000! This is the story of that mythical slugger, Carl Jaxsom, a man playing in an age of the game that won't allow his presence, told through the youthful eyes of a Boston grandfather recounting the tale to his grandson.

Through it an entire era in baseball and American history comes alive. Pure Baseball is a brief but richly satisfying work that every fan of the sport should experience.

As the author explains, his book examines a number of themes that have been key to America’s eclectic and turbulent past.

“References to The American Civil War, slavery, Indian affairs, and events concerning turn of the century Boston and the United States are all brought to light as they play upon the story of baseball's early years. The material is presented as a short story with a commentary on what is important in life,” says Thaddeus.

Continuing, “It describes a way of looking at and living a life dedicated to a person's own ambitions, interests, and talents so as to become that which you want most out of life. To live your life as you see fit with the unrelenting belief that the Universe will conspire in your favour to make even the most impossible dreams come true.”

Since its release, the book has garnered a consistent string of rave reviews; many from baseball’s elite.

“I read the book all in one sitting and was glued to the edge of my seat as I read the last few pages...the reader is taken back to get a glimpse of turn of the century life and, as you read it, you really start to wonder if maybe there was a conspiracy with the non-existent 1904 World's Series,” says Ruben Lipszyc, an acclaimed writer for the Canadian Baseball Network.

Neil Mallard, an entertainer and self-confessed baseball fanatic, was equally as impressed. He said, “I felt like I was at the ballpark. It was so exciting! I enjoyed it so much that I will read it over and over again.”

Fusing a powerful life-lesson with vital insights into the past, baseball fans and thousands of readers across the country have a treat waiting that lasts longer than any innings.

For more information on the book and where it can be purchased, visit: http://fictionstudiobooks.com/Fiction_Studio_Books/Pure_Baseball.html

About the Author: Ryan Thaddeus
Ryan Thaddeus grew up with two passions: writing and fast-pitch softball. His grandmother forged his love of the former with the bedtime stories she read to him. His father inspired the latter with his performance on the ball field. Today, he combines these two passions, traveling the world as a semi-pro fast-pitch softball player and writing fiction.

Along the way, he’s been a bouncer, a bartender, a bodybuilder, and a construction worker; he’s run companies, been a multi-sport athlete, and worked dozens of professions in between. PURE BASEBALL is his first published work. 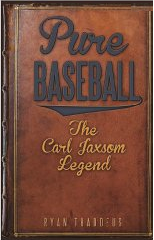