Los Angeles, CA -- (SBWIRE) -- 05/29/2012 -- Your Little Light Shines, a quantum physics look at the bible is now available as an e-book on amazon.com. When questioned why author Valerie Williamson, who is not a physicist or a minister, wrote the book, she said, “For years, in Psalm 23 when I read that God prepares a table before me in the presence of my enemies, I thought it meant that I would be sitting at a table, vindicated, in front of my enemies—real, alive people— who had ‘done me wrong.’ But when I discovered that the Hebrew word in this scripture did not mean a live-person enemy but rather worry or psychological anxiety, it helped me to understand how my (certain) thoughts could indeed become my real enemies. The same thing happened with the lights in Genesis, chapter one. For years, I never paid attention that the first light was a different light (different Hebrew words) from the sun and the moon. The study of light naturally led to Einstein and quantum physics.”

Your Little Light Shines, a quantum physics look at the bible is a masterful fusion of academic excellence with spiritual discernment and was written for the mature Christian who still experiences challenge after challenge after challenge and (deep down inside) senses that something does not quite connect between what you have heard and the life you are living. Williamson said, “My many challenges caused me see many other ‘not so victorious’ Christians. Two plus two did not equal four.”

A quantum is one of the very small increments into which many forms of energy are subdivided. Words are very small increments, yet are very powerful. Your Little Light Shines, a quantum physics look at the bible is a study of both biblical (Hebrew and Greek) words and the words that come out of your mouth as sound waves that transfer energy through space and matter. It is a matter of perspective. In quantum physics, what you think you have been looking at all along, you really may not have seen. If you can readily change your perspective, you can easily change your behavior.

After Dr. Maya Angelou read Your Little Light Shines, she called the author to say it was fetching. If you have any challenge in your life, discover what compelled Dr. Angelou to keep reading. 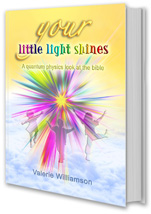