Paranormal activity is running wild this Thanksgiving holiday at the old 1939 and 1964 World's Fairs grounds in Queen's Flushing Meadows Park!

New York, NY -- (SBWIRE) -- 11/25/2016 -- This Thanksgiving holiday join New York's own Ghost Doctors on a ghost hunting adventure through the lawns and fields of NYC's Flushing Meadows Park -- the home of the two former World's Fairs.

With equipment in hand, like something out of blockbuster ghostly movie, the Ghost Doctors and their band of ghost hunting adventurers will prowl Queens Flushing Meadows to uncover its paranormal secrets.

The Ghost Doctors (aka Dr. Pete and Dr. Stew) noted paranormal investigators and licensed NYC tour guides say they have discovered signs of strange and ghostly paranormal activity within the 1255 acre wonderland located in the heart of Queens.

"We have investigated this area for quite some time and have found signs of supernatural happenings especially from the remaining remnants of the two World's Fairs," says Dr. Stew.

The Ghost Doctors say, searching through Flushing Meadows Park is like stepping back almost three quarters of a century in time considering all the historic and iconic structures that are still standing.

And maybe if the spirits are willing, the Ghost Doctors and their fellow explorers will hear a soft whisper or two echoing from this iconic NYC Queens park that will wish everyone a Happy Thanksgiving! 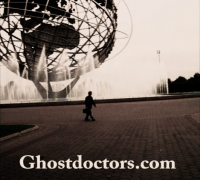