Radiohead Fans Plead "I Want You" to Alt-Indie Rockers, ADMIRALS

Tulsa alt-indie rockers ADMIRALS let fans know, “I Want You,” with upcoming video release for the track, which is also featured on their latest album, Amidst the Blue, and WiFi PR Group’s compilation, Indie Anthems Vol. 6.

Las Vegas, NV -- (SBWIRE) -- 07/21/2014 -- True alt-rock fans can’t forget hearing Radiohead’s OK Computer for the first time. That album, and the passion for music that blossomed from it, was enough to form the foundation of an alt-indie rock project that defies genre stereotypes. ADMIRALS carved a niche for themselves and now attract a grounded cult-like following that extends far beyond their home city of Tulsa, OK. After a showcase at SXSW and performing over 250 shows in 30 states, they are currently working to garner still more fans with an upcoming video for their track, “I Want You,” off their debut full-length album, Amidst the Blue. The song is also featured on WiFi PR Group’s compilation, Indie Anthems Vol. 6.

As Radiohead was a match in the dark for this rock band’s beginnings, it should come as no surprise that ADMIRALS channel Radiohead when crafting their experimental alt-indie rock vibe. Beyond the music itself, the lead singer’s voice reverberates with a fervent yearning and expresses itself in the way of Thom Yorke, who compelled his fans to hang onto his every word and phrase—an obvious comparison for any long-time Radiohead fan. ADMIRALS could also easily be thought of next to artists such as The Killers, Phoenix and Nine Inch Nails, particularly when the keyboard lines are at their fuzziest.

Lyrically, in addition to the eminent philosophers he studied in college, guitarist and vocalist Colton Tucker has looked to such lyrical greats at Jim Morrison and Thom Yorke to produce a bevy of emotive songs that cover an expanse of human experiences. At one moment, he sings of the highs and turmoil of love both found and lost, and the next, he addresses the very nature of the human condition or provides thought-provoking social commentary on polarizing issues.

Following their self-titled debut EP, ADMIRALS spent the next two years writing and recording their latest album, Amidst the Blue, released in May, with the help of Grammy award-winning producer Trent Bell (Flaming Lips, Chainsaw Kittens, Starlight Mints, Chemical Brothers).

If it feels like ADMIRALS’ music sounds familiar, it could be any of the several media placements they’ve arranged throughout their career. This doesn’t just include licensed deals with MTV’s Teen Mom 2 and Forever 21’s 2012 holiday ad campaign, which included two national ad spots and in-store video features. ADMIRALS have also been featured in documentaries, such as Road to Recovery, a film dedicated to the recovery and training of a famous motocross rider following a near-fatal biking accident.

Off their latest recording, Amidst the Blue, ADMIRALS’ track “I Want You” is at the forefront of their promotion efforts. The band is currently producing a video for the song, and it’s also featured on WiFi PR Group’s compilation, Indie Anthems Vol. 6, a collection of international independent talent spanning a wide range of genres that WiFi PR wants to put on the radars of music lovers and industry tastemakers the world over. Released at NXNE, the digital mixtape was handed out on 3,500 download cards to festival attendees, and 1,500 more download copies are now available on the Indie Anthems Bandcamp page for a limited time.

ADMIRALS will perform live at College Bar in Stillwater, OK, on July 11th, at Center of the Universe Festival in Tulsa with Awolnation, Young the Giant and Cold War Kids on July 25th and with Taddy Porter in mid-August. In the past, they’ve shared the stage with several national acts, including Burning Hotels, Me Like Bees, Fresh and Only’s, BRONCHO and Bear Hands.

To purchase music from ADMIRALS, fans can find it on Idol’s website, the band’s distributor, as well as various digital outlets, such as iTunes, Amazon, Rhapsody, Zune Store and more. ADMIRALS have also made their music available through Spotify, Pandora, Bandcamp, Soundcloud and other online music streaming services. For hard copies, fans can find physical CDs in most Midwest and regional independent record stores throughout the greater Tulsa area. 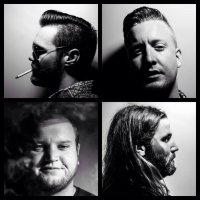